Kyi May Kaung's poem, In the Garden by the Lake: Mrs. Clinton goes to see Aung San Suu Kyi 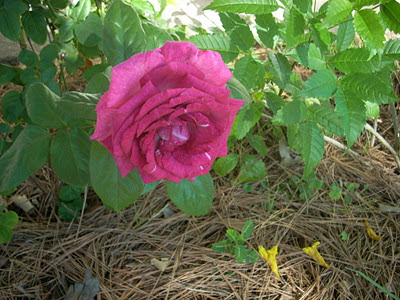 Why some prefer fiction over fact
reform vs. so-called reforms
election vs. sham election
Myanmar vs. Burma
Political prisoners vs. those who have committed crimes
Democracy vs. discipline flourishing democracy

One anonymous commentator says
do Suu Kyi and Hilary have
the same hair stylist what
they don’t realize is Burma is
very hot both climatically and
politically pulled back hair
off the face is best.
In the garden they hold hands like
long lost sisters.
In the background is Monica Lewinsky
and her blue dress Bill’s heart attack
Aung San Suu Kyi’s middle brother who drowned
as an infant
her elder brother who sued her about the house
at the junta’s instigation.

The private dinner is on American soil
Did they cue each other
that they’d both wear cream or off-white
or white? For hope and change. How many years is it
since Suu had a sit down western-style
formal dinner?

In the garden it’s like Carnation Lily Lily Rose
Suu’s mother was born
a Christian and loved white amaryllis with green centers which
she fertilized with the same water hyacinth that may later have helped drown her son.
A junta newspaper once faulted Daw Khin Kyi with having had
both a Christian and a Buddhist funeral service. What’s wrong with that?

The U.S. government plane flies into Naypyidaw (The King’s Royal City)
in the daytime, it’s not a night time airport
sleeps over in Thailand, then
picks up the U.S. delegation
and the press corps again.

Foreign Policy in Focus contributor Kyi May Kaung is a poet and visual artist and an analyst of Burmese and SE Asian politics.
Posted by Kyi May at 9:43 AM

http://www.voanews.com/english/news/asia/east-pacific/Thai-Prime-Minister-Meets-Aung-San-Suu-Kyi-in-Burma-135993048.html
Posted by Kyi May at 8:40 AM

http://internationalcampaignforfreedom.blogspot.com/
Posted by Kyi May at 8:29 AM

N Korea - only a little more totalitarian than Burma -

http://www.facebook.com/aungsansuukyihttp://www.blogger.com/img/blank.gif
Posted by Kyi May at 9:24 AM

As early as 2000, a National Geographic scientist/contributor, photographer told me that the most new species were being found in Vietnam, just before they became extinct.

Latest documentary on Burma - I met a man from Burma

http://www.divfacefilms.com/p/i-met-man-from-burma.html
Posted by Kyi May at 8:15 AM

http://www.firstpost.com/http://www.blogger.com/img/blank.giftopic/place/burma-burma-monywas-ancient-phowin-taung-caves-video-GkKfrNhODZ4-91646-1.html
Posted by Kyi May at 2:02 PM

http://www.youtube.com/watch?v=zP1IeAG-NUc&feature=relatedhttp://www.blogger.com/img/blank.gif
Posted by Kyi May at 1:48 PM

http://www.voanews.com/english/news/asia/southeast/UN-Burmese-Laotian-Opium-Cultivation-Surging-135657848.html
Posted by Kyi May at 12:52 PM

US Department of State - Where in the world is Mrs. Clinton?

http:http://www.blogger.com/img/blank.gif//www.asiapacificforum.org/show-detail.php?show_id=250#696
Posted by Kyi May at 11:55 AM

One of my father's favorite paintings.

Michelle Chen of Asia Pacific Forum interviewed me about change in Burma, is it real. Dec 13th, 2011

October 2011 Kyaw Aung Lwin of VOA interviewed me about poetry reading in front of Burmese embassy DC – 10,000 poets for change.
Posted by Kyi May at 9:38 AM

Karen National Union's Mahn Nyein Maung arrested in Yunnan in July and deported to Burma, where he is now on trial -

This is a very famous man and great writer whose book I partially translated.

Burma's junta: Can a tiger change its stripes by Kyi May Kaung

Here in Epoch Times, I am re-posting as the photograph is so evocative.

Hilary and Suu in Burma in pics --