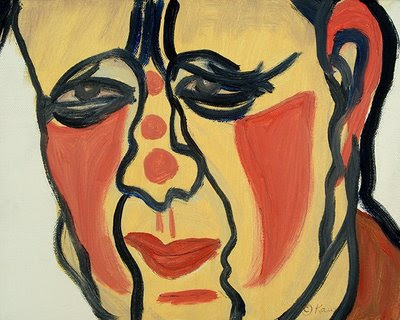 Now doing better than good ole Burma.
Posted by Kyi May at 11:10 AM

Make sure you read the interactive too --

of relevance to Burmese artists --

http://www.feer.com/essays/2009/january/awaiting-the-dawn-of-a-democratic-burma
Posted by Kyi May at 7:07 PM

“War, Memory and Representation in Art: Burma, Korea, Laos, & Vietnam”
A panel discussion organized by the Institute for Policy Studies
Date: January 28, 2009
Time: 7-9 p.m.
Location: DC Peace Mural Exhibition
3336 M Street, NW (Georgetown)
Washington, DC 20007
Website: http://www.ips-dc.org/events/1008
Contact: Kathryn Zickuhr, kathryn.zickuhr@gmail.com
Please join us on January 28 at the Washington DC Peace Mural Exhibition for a powerful
discussion of the representation of conflict and suﬀering in art.
In the forum “War, Memory and Representation in Art: Burma, Korea, Laos, & Vietnam,”
panelists Kyi May Kaung, Annabel Park, Channapha Khamvongsa, and Anna Huong will explore
the unique ability of art to bring collective experiences of suﬀering into the public discourse. e
discussion will be moderated by FPIF Co-Director Emira Woods.
e panelists’ own experiences and work have touched deeply on the relationship between art and
social justice. In her work with Legacies of War, Channapha found that “the integration of
storytelling, art, and performance are critical in breaking the silence” that surrounded wartime
experiences. rough art, traumatic individual memories can be woven into a larger context of
community grief, reconciliation, and healing. “e acknowledgement of a shared journey and
struggle could lead to collective strength and power,” Channapha says.
Such memories of conflict and suﬀering are not confined to the past, but resonate with current
events. In 1991, when the first Iraq War began, Huong says, “I came face to face with the memory of
the war and my demons. e numbed grief inside leaked out. e memories poured out and ached
within me.” Huong responded to this “call to action” with her famous Peace Mural, where the
discussion will take place. e mural includes nearly 2000 paintings, and when fully presented,
stands eight feet tall and 600 feet long. e exhibit runs until January 30.
About the panelists:
• Artist and researcher Kyi May Kaung was born in Rangoon, Burma where she was an Associate
Professor of Economics from 1978 to 1988. Her Ph.D. dissertation, from the University of
Pennsylvania, is on the erosion of human rights and the devastating eﬀects of central control in
Burma. She is based in Washington DC and is now an independent scholar, writer, and artist. Since
1997, she has worked in international radio, and with e Burma Fund as a Senior Researcher. An
interview Kyi May conducted with Huong at FPIF can be found here.
• Filmmaker and activist Annabel Park emigrated to the US when she was nine years old. She is
known for her innovative work combining new media and grassroots organizing. In 2007, she was
the national coordinator for 121 Coalition and organized the historic grassroots-netroots lobbying
campaign to successfully pass House Resolution 121, the "comfort women" resolution addressing the
issue of girls and women traﬃcked into sexual slavery by the Japanese military during WWII.
• Channapha Khamvongsa, co-founder and executive director of Legacies of War, was born in
Vientiane, Laos. In 1979, at the age of 6, her family fled Laos to Nong Khai refugee camp in
ailand. Her family eventually immigrated to the United States in 1980. In 2004, Ms.
Khamvongsa co-founded Legacies of War, which uses art, culture, education, community organizing,
and dialogue to bring people together and create healing and transformation out of the wreckage of
war. Channapha formerly worked in the Peace and Social Justice Unit of the Ford Foundation and is
a current board member of the Mine Advisory Group - America.
• For more than 30 years, Huong has communicated her message for peace as an artist, former
journalist, mother, Vietnam War refugee and fervent social activist. Huong was a 25-year-old mother
and Vietnamese journalist when she escaped her war-torn country in 1975 on the eve before the fall
of Saigon, catching one of the last refugee life boats and wearing only one shoe while clutching her
infant son. She soon embarked upon a journey that took her to Guam, then to California, and
finally to Alaska, where she turned to art. Nearly 15 years in the making, Huong’s Peace Mural is the
culmination of searing memories that bring history to life and depict the universal pain of war and
hope for peace.
Moderator: Emira Woods, Co-Director of Foreign Policy In Focus at the Institute for Policy Studies,
is an expert in U.S.–Africa relations. Prior to joining the IPS staﬀ, Emira was Program Manager for
the Committee on Development Policy and Practice at InterAction, serving as a principle staﬀ
contact for advocacy at the UN, the international financial institutions, USAID, and Treasury.
Foreign Policy In Focus (FPIF) is a think tank for research, analysis, and action that brings together 600 scholars,
advocates, and activists who strive to make the United States a more responsible global partner. e Institute for
Policy Studies is a multi-issue research center that has transformed ideas into action for peace, justice, and the
environment for over four decades.
Posted by Kyi May at 3:15 PM

Love the hat, the big grey coat, the pearldrop earrings.
Posted by Kyi May at 2:25 PM

Those who destroy higher education destroy themselves.


How bloody awful -- talk about the destruction of higher education in Burma.

These pictures say it all, don't they.

I'm so glad at least I can see Chiangmai University in Northern Thailand about twice a year in its teak forest and with flowering trees depending on the season.

My friends Kyaw Aung Lwin and Kaythwe Khine started Moe Ma Kha (Don't kowtow to the sky), then went on to work in international radio.

Kyaw Aung Lwin is the excellent poet Maru. But they only appear once a year. I'm still using lunch box she gave me last summer, to pack chinpaun (fried rosselle leaves) in. This was before my old frig was replaced, so sea food I bought at waterfront went bad.

I translated a poem of the late Naing Win Swe that features the Moe Ma Kha plant(sort of a water weed in Moeii or Thaung Yin River).

Naing Win Swe was a communist in the jungle and his poem is about how the revolutionaries tortured each other, (near) drowning each other in the river as punishment -- a sort of water boarding -- it was the first poem I broadcast in 1997, and won me an immediate poetry audience inside Burma.

Yesterday I went to see Defiance, about Polish Jews hiding in forest, staring Daniel Craig and another actor, who were both speaking Polish sometimes in the movie, maybe not that well, my Polish is not good enough for me to tell, but his "Polish accented" English sounded very real.

I was in Poland in 1969-70 for eight months, mostly over the winter. Spring barely started in May.

Copyright Kyi May Kaung
Posted by Kyi May at 1:51 PM

In Thailand, Australian author jailed for criticizing the King --

Designers visualize what Michele Obama should wear to the Ball --

More from The Huffington Post -- from a woman who tried to find it as it was happening live.

http://www.prospect.org/csnc/blogs/tapped_archive?month=01&year=2009&base_name=in_defense_of_pete_seeger
Posted by Kyi May at 11:38 AM

Archival tape of Marion Anderson, who visited Rangoon, Burma in the U Nu years.
Posted by Kyi May at 11:30 AM

If you're an undergrad or grad student, win a trip with NYT's Nicholas Kristoff --

Following Lincoln's example, Obama will come by train from Philadelphia to Washington DC for his Inauguration --

So successful he had a private airplane.

Tempera was his medium of choice.
Posted by Kyi May at 11:46 PM

Documentary Burma VJ picked up by HBO at Sundance --

About video journalists in Burma.

http://www.google.com/hostednews/ap/article/ALeqM5jKokkJ9uF1OdeZMIibOedfmAbVQAD95NTGU00
Posted by Kyi May at 2:18 PM

Did you notice -- hero for Burma, Christopher Gunness, in 1988 famous for his broadcasts from Rangoon --

now at UN in Gaza when Isrealis shelled UN building where refugees had taken refuge.

http://mirca-art.com/beacon.htm
Posted by Kyi May at 3:44 PM

http://www.cranialvault.org/the-artists/
Posted by Kyi May at 3:42 PM

Burma Road being rebuilt by China --

Journalist Min Zin on his brother and others' detention in Burma --

Kevin Kline in Cyrano on PBS --

A very good translation, I thought, and no wonder -- translation is by Anthony Burgess (A Clockwork Orange)

It sounds like Shakespeare and totally different from the blah film versions I saw before.

Everything in this production is perfect. 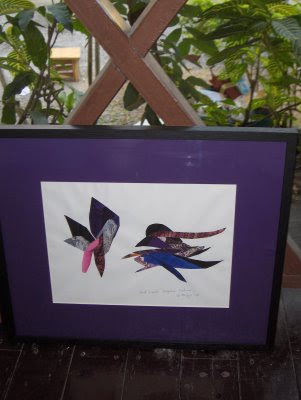 
Chiangmai Mail did not put the artist's names with the paintings. I would have liked to know who painted those beautiful images, especially the ones done with a palette knife.

Thank you Nance, Ko Aung and All who helped me cart pictures back and forth --

It's a great honor to have one's work "hung" with so many brilliant paintings.

one quilted coat I gave away and one (picked from garbage!) -- a good black wool long coat worth about $100, that was too small for me -- I gave both of these to refugees/visitors/interns from Burma.

All a problem of knowing what to throw away and what to keep.

I will never throw away re-cycled wearable art that I make myself from heirloom clothes and linen.

Another memoir on Oprah Show found to be (partially) made up --

Why was it marketed as a memoir?

Why did he not write it as a novel (fiction)?

Sensationalism is the culprit.

I can think of several examples from the Burmese survivor/media world.

Good non-conformist blog - how to travel on a shoestring etc.

http://burmanewscasts.blogspot.com/2009/01/new-years-resolutions-for-nld.html
Posted by Kyi May at 8:47 AM 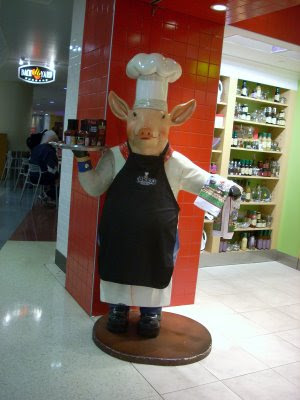 "It's glorious to get rich."

"If you open the windows, some flies might get in."

and apparently "We must allow some people to get rich first."

Deng's economic reforms of 1978 were accompanied by a downsizing of the People's Liberation Army(PLA)and "a more professional army."

China is looking to a new economic model, perhaps led by the domestic market and satisfying its domestic demand from over a billion population. Maybe its industries will have to change its product mixes.

I hope it won't draw down or draw out its money in U.S. Treasury Bills, which are now propping up the U.S. government, which is attempting to bail-out or being asked to bail out U.S. industries and financial institutions in trouble.

Food for thought for the New Year.

So simple, so direct, so timeless, so beautiful.

Nothing like the stupid and downright destructive "restorations" done by the junta in Bagan (spelled "Pagan" before) in Burma --
Posted by Kyi May at 1:12 PM