http://www.npm.gov.tw/exh96/dai-chien/index.html I don't know how to activate links on this new format but the Memorial is at the National Palace Museum in Tapei, Taiwan. Kyi May Kaung
Posted by Kyi May at 1:55 PM

Voltaire and his room at Sans Souci Palace in Potsdam

http://en.wikipedia.org/wiki/Voltaire I've seen Frederick's San Souci palace in Potsdam and the overly decorated room with pink parrots on the walls where Voltaire lived for a while. The whole palace was not more than one room wide throughout its length and the slaves/servants - had to go in the narrow passages between the walls to empty out the commodes the guide said no one ever bathed much and overused perfumes etc. I wrote a short story called My Potsdam - about a guide whose home had been confiscated in E. Germany days. One cottage I saw was held together by a wire mesh. kmk
Posted by Kyi May at 2:04 PM

http://www.rohingyablogger.com/2012/01/my-fathers-release-from-prison-is-good.html
Posted by Kyi May at 9:02 AM 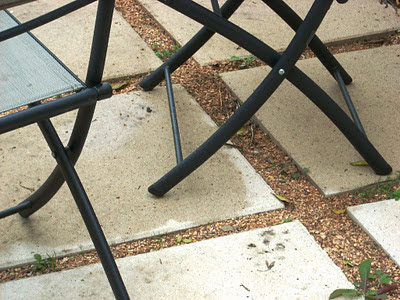 Abstract chairs - photo copyright Kyi May Kaung http://www.poetryinternational.org/piw_cms/cms/cms_module/index.php?obj_name=www
Posted by Kyi May at 9:28 AM Yellow rose half light. Photo copyright Kyi May Kaung
Posted by Kyi May at 1:41 PM

Amazon Exclusive: Daniel Silva on Writing Portrait of a Spy with a Pencil While on book tour, I’ve been surprised to find that readers are fascinated by how writers actually write. Most readers hold in their mind an idealized image of the novelist at work—a figure in a trendy urban coffeehouse, a solitary figure walking along an empty beach. The truth, however, is seldom so romantic. Before going any further, let us stipulate that, much like the hero of my novels, the art restorer and spy Gabriel Allon, I am something of a creature of habit. I work seven days a week, from early in the morning until six thirty in the evening, when I stop to watch the evening news. My work clothing never varies: gray sweatpants by Russell Athletic, a long-sleeve T-shirt by L.L. Bean, fleece Acorn moccasins, and discount cotton socks from Marks & Spencer in England. Occasionally, visitors to our house will catch a glimpse of this outfit, but, for the most part, my wife and children tend to shield me from public view. As a rule, I don’t answer the telephone—unless it is a family emergency of some sort—and I don’t read e-mail. I nibble rather than eat. Portrait of a Spy, like all the Gabriel Allon novels, was fueled largely by McVitie’s digestive biscuits. I have a computer, of course, but I really do most of my actual writing in longhand, on yellow legal pads. I prefer to work while lying on the floor rather than at my desk. This annoys my wife because she took a great deal of time and effort to have a desk custom made to fit my office. When I showed her a photograph of Muriel Spark, one of her literary heroes, writing in longhand stretched across a floor, she was only partially mollified. Sometimes we talk about living somewhere other than Georgetown. Secretly, the very idea terrifies me. After writing 14 books in the same room of the same house, I am afraid I have lost the ability to work anywhere else. As for my writing instrument of choice, it is unquestionably the pencil. There is something about the sound it makes scratching across the page that, for me, is the essence of composition. The pencil is the antithesis of all things cyber and e, a means of returning, however briefly, to a world that is unconnected and unwired. A pad and pencil do not freeze or crash. There are no viruses or error messages. If a thunderstorm knocks out the power, the words will still be there when the lights come on again. And then, there is the satisfying natural rhythm of the work itself—the turning of the completed page, the sharpening of the dulled point, the fortnightly disposal of the fluffy wooden shavings. Lately, I have been hoarding pencils. I’m not sure precisely when it began; I suspect it had something to do with the death of the typewriter. An irrational fear gripped me, a fear that pencils were next. If the typewriter could go extinct, how could the lowly, environmentally hostile pencil possibly hope to survive in the brave new world? I now order my favorite brand—the Paper Mate Mirado Black Warrior No. 2—by the case. I am reasonably confident I now have enough pencils on hand to see me through the next several novels—though, if I happen to misplace a pencil, I will search the house thoroughly before removing a new one from its special drawer and sharpening it for the first time. To sharpen a virgin pencil is, in a sense, to commit an act of assisted suicide. It saddens me. I wish it were not so. I wish I could write on a computer while traveling on an airplane or sitting in a strange hotel room, but I cannot. I have become a prisoner of my office. I need my floor, and my Mirado Black Warrior No. 2 pencils, and my McVitie’s digestive biscuits. I hoard them, too. I keep them on a special shelf in the storage room, next to my socks from Marks & Spencer. Copyright © Daniel Silva 2011. All Rights Reserved.
Posted by Kyi May at 10:17 PM

Poetry International Web - Zeyar Lynn
Posted by Kyi May at 5:57 AM

http://www.myanmar-image.com/mandalay/misc/image19.html
Posted by Kyi May at 8:20 AM

Bhava Chakra - in Burmese - Bawa Setkya - the Wheel of Life

http://www.sacred-destinations.com/india/ajanta-caveshttp://www.blogger.com/img/blank.gif
Posted by Kyi May at 12:23 AM

http://www.youtube.com/watch?v=6ihT3AX1Aww&feature=relmfu
Posted by Kyi May at 11:56 AM

http://www.mizzima.com/news/inside-burma/6354-suu-kyi-meets-soros-the-billionaire.html
Posted by Kyi May at 10:39 AM

Iran accuses American of spying and sentences to death

http://www.wildriverreview.com/4/profile_kaung.php
Posted by Kyi May at 7:20 PM

http://www.nytimes.com/2012/01/01/business/wordniks-online-dictionary-no-arbiters-please.html?_r=1&nl=todaysheadlines&emc=tha26
Posted by Kyi May at 10:32 AM