In the Garden of Beasts - by Erik Larsen -

US Ambassador and his daughter in Berlin as Hitler rose to power.

http://www.nytimes.com/interactive/world/africa/2011-libya-index.html
Posted by Kyi May at 3:04 PM

http://www.telegraph.co.uk/news/worldnews/africaandindianocean/libya/8726797/Mutassim-Gaddafis-girlfriend-tells-of-the-final-days-of-Libyan-regime.html
Posted by Kyi May at 3:00 PM 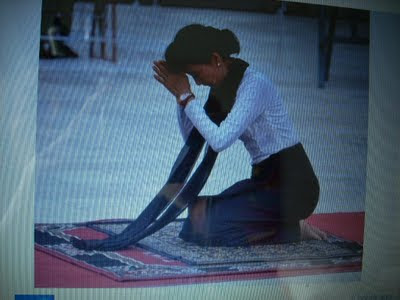 Burmese democracy leader and Nobel Peace Prize winner Aung San Suu Kyi, pays her respect to her assassinated father, and Burma's founding father, Aung San, on July 19th, Martyrs' Day. This was the first time the junta allowed her to participate in the official ceremony.


Bones Crow is edited by James Bryne and edited/translated by Ko Ko Thett.

http://www.sampsoniaway.org/literary-voices/2011/08/22/bones-will-crow-an-anthology-of-burmese-poetry/
Posted by Kyi May at 11:16 PM 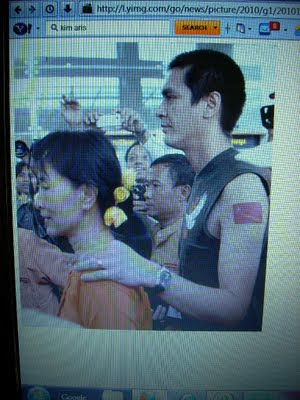 - more ties with ASEAN, AEC
- better/more taxation
- industrialization
- dealing with corruption
-how to deal with international financial crisis through IMF/about IMF (U Myint)

However, all this is under pretense that it is "a government elected by the people" - one of the papers (in Burmese) explicitly states this blatant untruth upfront as if it were true.

None of papers deal with structural/systemic issues -

so nothing can be done about nepotism for instance when surely Thein Sein's and Than Shwe's relatives and others among junta cliques, are all involved, just like Gaddafi sons, "who were given country to loot"

so ultimately it is all "Show Business" as we Burmese say, and an exercise in futility.

No wonder Daw Suu looks serious and not so happy.

There is also concern that Daw Suu is separated from her usual phalanx of (unarmed) "bodyguards" and NLD supporters/loyalists.

http://en.wikipedia.org/wiki/Sergio_Pinheiro
Posted by Kyi May at 2:00 PM

http://www.law.harvard.edu/programs/hrp/documents/Crimes-in-Burma.pdf
Posted by Kyi May at 1:37 PM

http://latimesblogs.latimes.com/culturemonster/2011/08/shepard-fairey-explains-his-new-poster-for-aung-san-suu-kyi-movie.html
Posted by Kyi May at 1:12 PM

Quote: The regime is finding out that the charade of multi-party elections
and all the expertly spun talk of a “post-election landscape” have not
brought them closer to international acceptability. To be sure, the
generals have found no shortage of “friends,” strategic allies,
co-exploiters of resources, investors and business partners among
Asian rulers, from Beijing and Delhi, to Bangkok and Singapore. But
the regime has been unable to dilute the world’s perception of it as a
despicable pariah, and Washington’s dogged refusal to relax its
opposition against key international lenders and development banks
such as the International Monetary Fund, the World Bank and its Asian
offshoot, the Tokyo-dominated Asian Development Bank. This dampens
even the Association of Southeast Asian Nations’ (ASEAN) enthusiasm to
let Burma’s not-so-presentable generals chair its overly ambitious,
business-oriented bloc, lest Naypyidaw drives potential investors away
from the ASEAN region, in fierce competition for capital and
investment inflows with China, India and other international rivals.

Last but not least, the generals have been on a mission to militarily
subjugate politically defiant ethnic communities such as the Shan,
Kachin, Karen, Mon and so on. The Burmese military’s zero-sum policy
towards any of its critics, non-violent or armed, has already
backfired, as it has predictably resulted in the complete breakdown of
a 17-year ceasefire with the Kachin. The fact that the regime invited
Daw Aung San Suu Kyi “as an individual observer” to the “poverty
workshop” can only be seen as a cynical public relations ploy, part of
the generals’ “pacification campaign”.

What the late Swedish Prime Minister Olaf Palme remarked truthfully
about the apartheid in Mandela’s South Africa – that apartheid cannot
be reformed, but it must be dismantled – equally applies to Burma
under half-century of military dictatorship. The generals’ class rule
in Daw Aung San Suu Kyi’s Burma cannot be reformed through talk of
poverty and talks of ‘the Talk’. The Burmese electorate gave Daw Suu
and her hundreds of NLD colleagues their overwhelming support in the
ballots two decades ago in order to specifically help end the military
dictatorship and usher in a new era of “government of, for and by the
people” – and not simply to play the game of dialogue and engage in
the talk of poverty over fancy meals in Naypyidaw

Ultimately, politics is about power—power to reform politically
repressive institutions and economically dysfunctional structures, as
well as, and above all, the military which created (it).


My foregone conclusion is that there is absolutely no plan among the generals to
share power with other popular stakeholders of Burma such as Aung San
Suu Kyi and ethnic minority leaders.

in Burmese, from Moemakha News

The other Burmese woman in the photos is Ms. Mary Yin with an MBA from an American university.

But it is doubtful any of the advice will be followed by military - in fact in its patron client relationships, authoritarian structures and corruption as a way of life and buying support, it may be unable to relinquish central control.

The "Myanmar goers" in Burmese from Burmese government affiliated The Voice

From outside anonymous commentator -

"Why aren't Bob Taylor and (Mary) Callahan there? Maybe in due course."
Posted by Kyi May at 10:35 PM

Dr. Kyaw Thet was a student of my father, educator Sithu U Kaung, and when they were children, Lin Aung Thet and his 2 sisters often came to visit with their parents.

Yes, the fifties were a time of openess and democracy - even U Nu in the same Ed Morrow program, who was supposed to have better Burmese than English, spoke good English and was able to hold his own with a foreign interviewer.

U Nu wrote and translated several books and his niece Khin Hnin Yu was a famous novelist.

U Nu's great mistake was being naive and "too religious" and giving Ne Win virtual carte blanche after NW quelled the Karen uprising. (This from a close friend of Dr. Kyaw Thet's who was born on the same day and has also passed away). 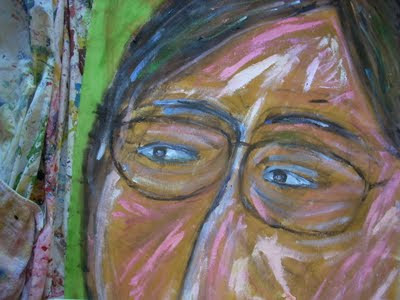 Thus, in an inscription in the Shwegu Temple, we find this beautiful prayer, written in Pali verse, by King Alaungsithu (1112-1167):

By this my gift, whatever boon I seek,
It is the best of boons to profit all;
By this abundant merit I desire
Here or hereafter no angelic pomp
Of Brahmas, Suras, Maras; nor the state
And splendors of a monarch; nay, not even
To be the pupil of a conqueror.
But I would build a causeway sheer athwart
The river of Samsara, and all folk
Would speed across thereby until they reach
The Blessed City. I myself would cross,
And drag the drowning over. Aye, myself
Tamed, I would tame the willful; comforted,
Comfort the timid; wakened, wake the asleep;
Cool, cool the burning; freed, set free the bound.

And Alaungsithu’s predecessor, the conqueror and builder Kyanzittha (1084-1112), inscribed his edicts on massive pillars in this vein:

O King of Devas, hear thou! . . . The sage Bisnu shall become the king Kyanzittha, and he shall uphold the religion of the Lord Buddha . . . . All vice, which is as a stench, shall the king utterly blot out with true morality, which is as a perfume. . . . The tears of those who have lost their friends shall the king wipe away with the hand of loving-kindness. . . With his right hand shall the king give boiled rice and bread to all the people, and with his left hand ornaments and wearing apparel to all men. . . .He shall soften the hearts of those who intend evil, and exhort those who speak evil to speak good. . . .

From Zawgyi (U Thein Han's) article on early Burmese art in The Atlantic, 1959, under the pseudonym Thaw Ka.
The inscription translations are by the renowned scholar, Gordon H. Luce.
Posted by Kyi May at 1:29 PM

Exhibition of Burmese gold and lacquerware in Nice, France -

http://www.artmediaagency.com/en/26549/exhibition-of-lacquer-and-gold-artefacts-from-myanmar-in-nice/
Posted by Kyi May at 10:23 AM

http://www.dallasnews.com/entertainment/books/20110505-author-larry-mcmurtry-marries-ken-keseys-widow.ece
Posted by Kyi May at 9:57 AM

K.M. Kaung: A Masterpiece from One Whose Life was Too Short - book review of Utz by Bruce Chatwin -

I had "heard about" Bruce Chatwin from an article about him and the fatwah, by Salmon Rushdie who traveled with him in Australia before he died. Rushdie had just heard of the fatwah when he went to Chatwin's funeral.

Around 1994 a friend had recommended Utz to me.

But I did not get to read it till relatively recently.

The inexpensive Amazon price was a real deal, though Chatwin's books have been published, it seems to me, on cheap paper, but that's not Amazon's fault.

Anyway, the book did not disappoint at all.

In fact, it more than lived up to its advance billing.

It's a very satisfying read, though tightly written it does not sound terse at all.

I read about the Meissen Collection and August the Strong in an issue of Architectural Digest. 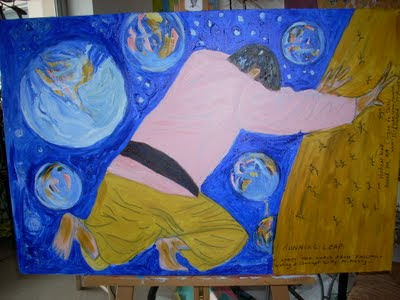 
My painting Shan Black Belt Saves the World or Running Leap is on exhibit at Space 7-10, Kefa Cafe, 963 Bonifant St., Silver Spring MD as part of the Alumni Potluck Show.

No opening reception is scheduled, but if you wish to come down there, I may be able to come too.

Check times at the link above.

I am available for interviews via phone or at Kefa.

with "interview request" in subject line.


We can talk about?

Is there really a "civilian government" in Burma right now?

Why is the world falling? What does this painting mean?

How to be an artist when stocks are falling in a recession.

How I conceived of this painting -

How to forge your own individual style, etc.

Note - images from my previous show in 2009 "Mostly Burmese Monks" is on the Kefa Blog, in the video about Kefa Cafe on the right.

http://en.wikipedia.org/wiki/Citizen_Kane
Posted by Kyi May at 8:58 PM

London rioters who appeared in court, white and "respectable" from CNN

Moving report by Dr. Sanjay Gupta.
Posted by Kyi May at 11:41 AM

Welcome to the world of Lisbeth Salander (Girl with the Dragon Tattoo) and Penelope Garcia, from Criminal Minds.
Posted by Kyi May at 10:12 AM

Burmese names - by Ba Kaung - who isn't related to me, though I have my father's name