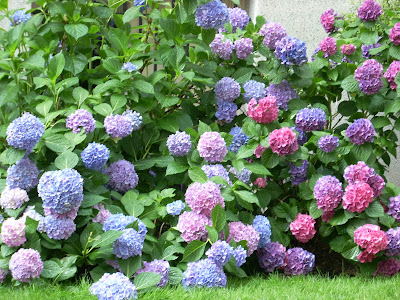 I am now on Women in the Arts data base

http://www.womenarts.org/network/index.php?action=profilesearch&subaction=performsearch&ss=kyi+may+kaung
Posted by Kyi May at 11:38 AM

Particulars of my Upcoming Art Show in Thailand 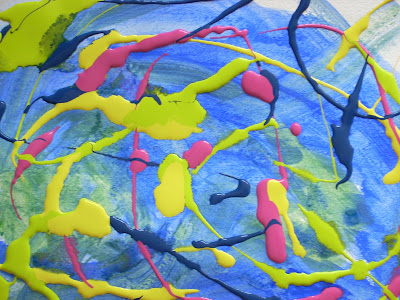 Suvannabhumi Gallery, Chiangmai will present Burmese exile artist Kyi May Kaung’s Yo Franz! & Yo Jackson! Art Show. Her splash-drip-pour paintings, collages, "collaints" and iconic portraits of imagined nats or spirits will be on display.

Kaung’s work has been compared to that of Franz Kline and Jackson Pollock (by City Paper Art Critic Louis Jacobson in 2001) and in this
path-breaking show, a diversity of her works will be presented.

Poster for my Upcoming Art Show in Thailand. 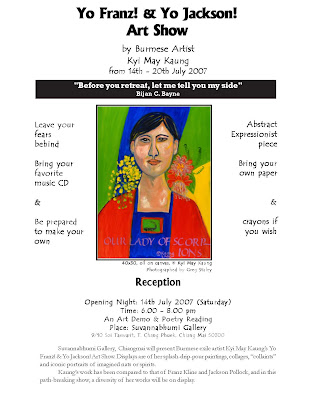 THANK YOU, MMS, and Suvannabhumi Gallery.
Posted by Kyi May at 5:57 AM

Refugee Parrots in Singapore and the Netherlands

They become naturalized as they are trafficked so intensively -- escapees link up with each other. Though from different parts of the world, they "recognize each other as parrots."

Do the parallels ring a loud bell in your head, especially if you are a refugee, or an African American descended from slaves?

See pictures on this site of scarlet macaw flying over Dutch rooftops and a sulfur crested cockatoo in a tree in Singapore.

The report concludes so far these immigrants have survived by flocking with other birds, not just other parrots, and have not had any adverse affect other than waking suburbanites with their loud cries.

I highly recommend this Power of Art Series. I may not agree with everything Schama says, and sometimes his analyses may be too pat and dramatized, but it is a great starting point to pique anyone's interest.

Also to revive interest in artists such as Picasso and Van Gogh, who are written about often.

This piece on 17th century artist Carravagio is illustrated with many paintings and dramatic recreations of episodes in his short and turbulent life.

I never knew before that one could be sued for libel for writing a poem, which is what happened to set Carravagio on his downward spiral, into murder and attempted redemptions through his amazing art.

He painted so fabulously, in a cinematic way before cinema, with wonderful lighting that seems to rake the characters in action. Carravagio shows us moments that are freeze-framed but full of movement, emotion, meaning and life.

I would not have if I had seen this TV piece earlier.
Posted by Kyi May at 4:56 PM

Travels to the Edge with Art Wolfe

Beautiful program, this week about grizzly bears on Katmai Coast of Alaska.

Note the moving collage of dramatic still shots and video cam work, with music that incorporates animal and bird cries.

You get to enjoy majestic nature without enduring the cold, bug bites and
other discomforts.

Obituary -- Daw Than E- Burmese Woman for All Seasons 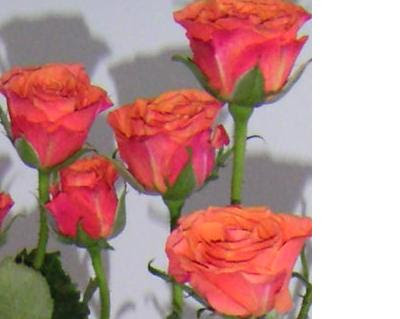 http://www.mizzima.com/MizzimaNews/News/2007/June/44-June-2007.html
Photograph of Daw Than E with Daw Aung San Suu Kyi in Algiers and in her portrait by Sir Gerald Kelly c. 1930 can be found in Freedom from Fear, first edition,
as well as in this obituary at Mizzima.com
Thank you, Mizzima, for publishing this.
Posted by Kyi May at 9:48 AM

But try this too. 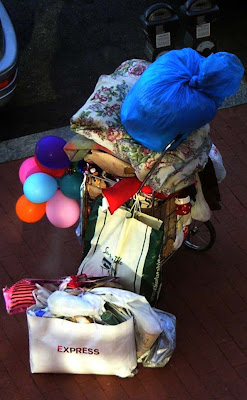 I liked the ending the best. Opening paragraph was given to us. I think story wandered badly, but ending was brilliant and funny.

Quote from Iraq Veteran Adam Kokesh - on protesting the war --

"So it was cool that it had an immediate effect, and sometimes, you know, pointing out something, when you have something to point out that’s actually relevant. You know, sometimes standing there, holding a sign can actually make a difference."

Yo Franz! Yo Jackson! My upcoming art show in Thailand. 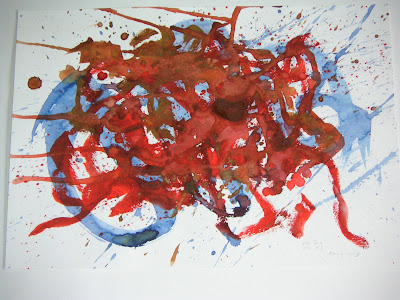 "Sha! Sha!" or "Kill! Kill!" The war cry during the Boxer Rebellion in China. Acrylic on paper, 12x18", copyright Kyi May Kaung.

Kyi May Kaung: Yo Franz and Yo Jackson – at Suvunnabhumi Gallery, Chiangmai, Thailand. July 14 to July 20th, 2007. Opening reception, July 14.
Artist’s Statement:
At the opening of my first show Flux at the Foundry Gallery on Dupont Circle in Washington, DC in March of 2001, art critic Louis Jacobson of the City Paper, compared my art to that of abstract expressionists Franz Kline and Jackson Pollock. Unlike the route taken by most artists, I started with abstract art. Only recently, since 2005, have I started to paint with an empirical referent – anonymous portraits and figures.
I continue to paint in different styles and make collages and other constructions. This show represents work made since 2001. Former Foundry Gallery manager (now head at Montpelier Arts Center), Ruth Harwood, has compared my work to that of artist Xu Bing, who writes a “Chinese” script, which is really English. Silk artist Beatrix Slotkoff said my art –“always has a scent of the East.” I feel it is not for me as the artist to define or interpret my work. I just make it.
Artist’s Bio:
Born in Burma during the Japanese Occupation of World War II, Kyi May Kaung has painted since childhood. As a teenager, she was instructed in some art techniques, at home by famous Burmese artists U Ngwe Gaing and U San Win. She developed the habit of looking at art from her father, the well-known educator, U Kaung. However, with formal training in economics and an Ivy League doctorate in political economy from the University of Pennsylvania, it was only in 2001 that she grew “temporarily tired of words” and started painting intensively.
Her one woman shows since then are Blotches from Burma, October 2005, and Mostly Burmese Mugs, March 2007, at Space 7-10, an alternate art space in Silver Spring, MD. She has had several group shows, including one with other refugee artists at Gateway Heliport Gallery, also in Silver Spring, in the Fall of 2006.
This show features her abstracts as well as her collages, small oils and acrylics on canvas. The artist wishes to thank all her friends who have helped her on her arts journey. Dr. Kaung also writes poetry, fiction and non-fiction and has won several awards.
Posted by Kyi May at 3:10 PM

Friends,Here is another short video from Iraq Veterans Against the War,specifically Marine Adam Kokesh who is being punished forparticipating in the street theatre demonstration Operation FirstCasualty (documented in the video I sent a day or so ago). This pressconference took place Friday 1 June at Union Station in Washington DC.Support the troops; listen to them.http://www.youtube.com/watch?v=6ApVMr4XcGkwww.ivaw.org
LLaura CostasMilitary Families Speak Out,
Veterans for Peace, chapter 16
theredbudtree@earthlink.net
301-650-2326
Posted by Kyi May at 9:07 PM

Iraq Veterans Against the War -- demonstration in NY

http://youtube.com/watch?v=BabrfOC0cbM
Posted by Kyi May at 9:48 AM 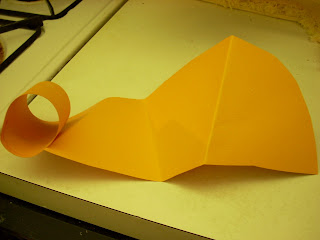 To be cast later in steel -- copyright Kyi May Kaung 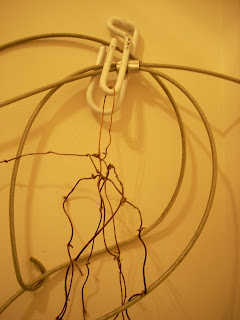 Watching sculptor Richard Serra install his massive curved rusty iron sculpture at MOMA has started me off on my sculpture daydream again. To be a real sculptor one needs a 3D mind. Mine is mostly 2 D. And one needs proper arts technique training, probably in the form of a Masters in Fine Arts; the ability to work with “masculine” materials such as stone, steel and iron, fire, glass.
There are sculptors – for instance Andy Goldsworthy, who makes sculpture out of ephemeral found materials such as sand, flung dust, water, icicles welded together with his own urine, leaves, flower petals, feathers etc.
Don’t wrinkle your noses at me, you stuck up Victorian mamas! Goldsworthy’s works are beautiful, made once, photographed and then left to decay. They are like the Tibetan monks’ sand mandalas, made of colored sand and yak butter, then not kept but swept up and dismantled, the sand put back into the sea.
This kind of art is the best. It’s not kept to cater to the artist’s vanity. It’s very Buddhist. After all Anatta, Negation of Self, is a basic Buddhist concept.
Some of Goldsworthy’s art is like ikebana, in a natural setting. Carefully graded autumn leaves sewn together with thorns wind their way down a stream and over rocks, subtly shaded from green to yellow to gold and red. Nothing could be environmentally friendlier.
I make folded paper which I hope one day to have cast big scale in steel. I save bones from dinners in restaurants and shells from the seaside.
It’s healthy to dream and flip one’s brain from 2D to 3 D.
Peace.
Posted by Kyi May at 10:24 PM