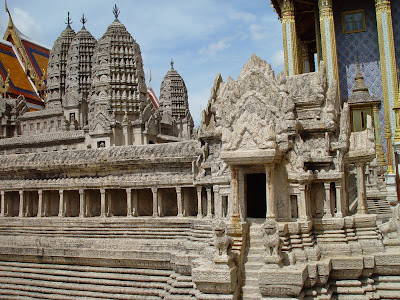 The maker of this replica seems to have assumed, anomalously, that the corner towers were in the Banteay Srei style -- visually, as you can see, it does not at all "fit" the prangs of the main quincux of towers.

From the remaining shape and style of the 3 towers at the first entryway, immediately after the moat and before the causeway, I am inclined to think that the corner towers would have echoed the same prang shape as the towers in the central shrine.

Besides, Bateay Srei (consecrated 967 AD) - is much earlier than Angkor Wat (early 12th century) and is recognised as a different style by most art scholars and historians.

Just speaking visually as a practicing artist, I think the anonymous architect/designer of Angkor Wat was too fine an artist to make a visual error as we see in this rather jumbled (Thai) replica.

See Thierry Diwo, Angkor Wat Forever, for an aerial view of Angkor Wat. You will see what I am talking about.

P.S. -- The photographer has granted permission for anyone to use this image, copy or modify it.
at July 31, 2007