Jewish survivor of Holocaust: "If I survive, I will paint."

A prisoner at Auschwitz and three other camps, he dealt with his trauma in semiabstract art that depicted crematories, ovens and chimneys. 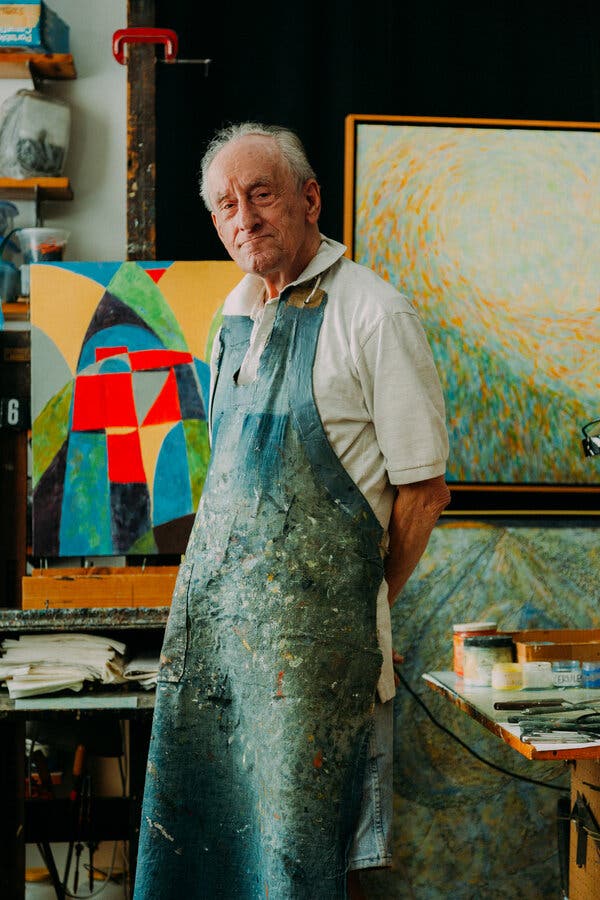 The artist Fred Terna in his Brooklyn studio in 2015. “How does one paint the near certainty of violent personal annihilation?” he once asked.Credit...Daniel Terna 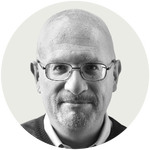 Fred Terna, an artist who tried to exorcise the psychological trauma of his imprisonment in four Nazi concentration and labor camps with semiabstract paintings that depict fire, ashes and chimneys, died on Dec. 8 in Brooklyn. He was 99.

His son, Daniel, confirmed the death, which was not widely reported.

Mr. Terna’s art became his Holocaust testimony. In acrylic works like “In the Likeness of Fire” and “An Echo of Cinders,” he painted in reds, yellows, oranges and blues to illustrate the flames that incinerated Jews in crematories. In some paintings, he used sand pebbles to represent ashes.

“I know how the fire of a crematorium chimney casts flickering light on a barrack wall,” he wrote in 1984 for the Berman Archive at Stanford University, which documents American Jewish communities. “How does one paint the near certainty of violent personal annihilation? How does one paint, and then make a viewer want to stop, to look at a canvas, to react to it?”

He added, “As there are fewer and fewer of us, I feel the increasing weight of the promise we made to each other in Auschwitz, in Dachau and in so many other places:

“If I survive, I will tell what it was like. I paint.” 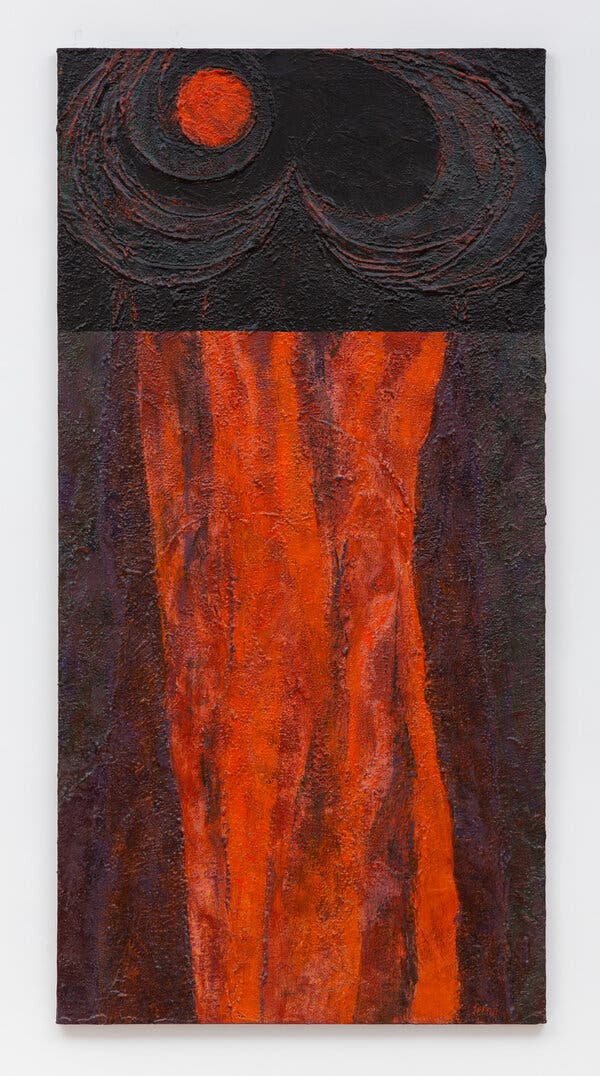 Mr. Terna’s “Ascent in Fire” (2003). “I’d call his work representing the Holocaust beautiful even if the imagery is not beautiful,” one curator said.Credit...Fred Terna

“An Absence in the Fire” suggests an open door into an oven, in which a figure appears to be aflame. “Lasting Drift,” painted mostly in shades of black and blue, shows a chimney belching smoke, with small sticks in the foreground that represent bones.

“I’d call his work representing the Holocaust beautiful even if the imagery is not beautiful,” Suzy Snyder, a curator at the United States Holocaust Memorial Museum, to which Mr. Terna donated two dozen works, said in a video interview. In the same interview, Fred Wasserman, another curator, said, “I don’t think his work looks like anything else in our collection.”

Daniel Terna said that even when his father’s work was lighthearted, his paintings still evoked fire. “With greens and blues,” he said by phone, “the form of flames was still there.” 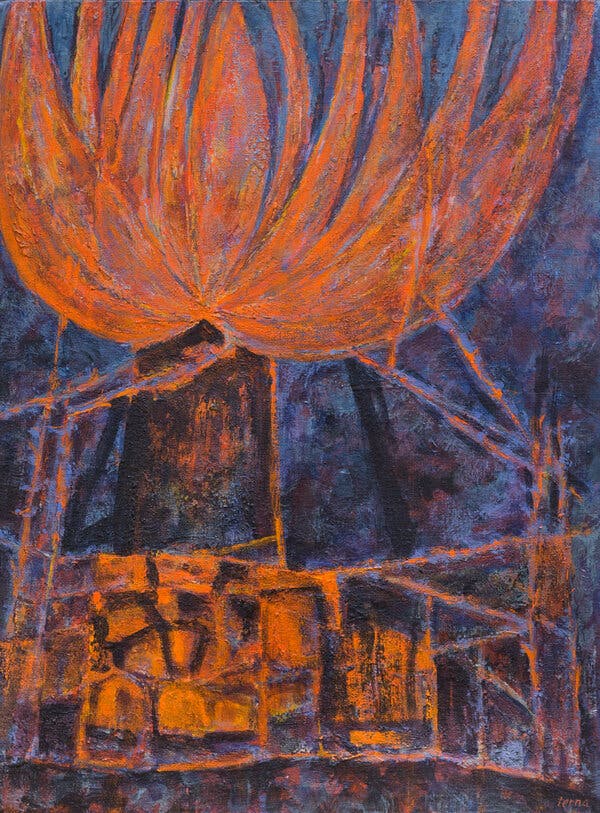 Writing in Bomb magazine in 2016, the critic Stephen Westfall noted that one of Mr. Terna’s paintings depicts what looks like a white snow patch or pond surrounded by light brown earth. But, he wrote, “The image actually derives from a snow-covered pit of corpses.”

The anger that Mr. Terna felt at the war in Ukraine led him to create another flame-themed painting last year. “Putin’s moves just triggered that in him,” his son said.

Bedrich Arthur Taussig was born on Oct. 8, 1923, to a Czech family in Vienna. His father, Jochanan, known as Jan, worked in the maritime insurance business. His mother, Lona (Herzog) Taussig, was a homemaker.

Fred, his parents and his younger brother, Tommy, soon moved to Prague, where Fred’s mother died of pneumonia in 1932. With the threat of Nazism growing, Fred’s father changed the family name to Terna to sound less Jewish.

But the Ternas were not safe. After the German invasion of the Czech provinces of Bohemia and Moravia on March 15, 1939, Fred was expelled from high school in Prague because he was Jewish. His father sent him into hiding to a farm outside Prague, where he stayed until the fall of 1941.

But when the Gestapo learned he was there, he was sent to the Lipa labor camp in Prague; after two years, he was moved to Theresienstadt, also in Czechoslovakia, which was a ghetto as well as a transit, labor and concentration camp. His father and his girlfriend from Prague, Stella Horner, were also there. 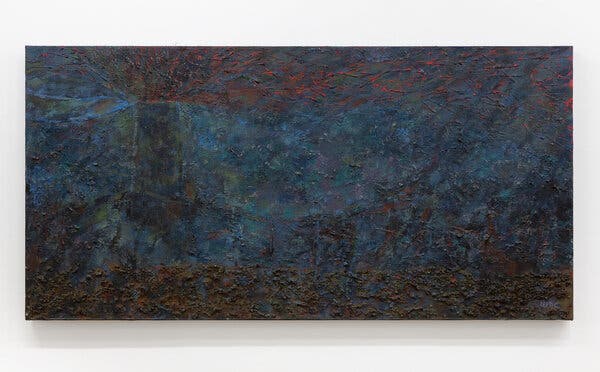 Although he was untrained, Mr. Terna began to draw at Theresienstadt and became part of a group of artists there who scrounged for good paper and any raw material they could turn into ink. He buried his sketches of everyday life there in a tin box under the barracks floor.

Before being deported to Auschwitz in September 1944, Mr. Terna gave his drawings of everyday events, like people lining up for soup, to another prisoner, believing he would never see them again. He had spent only two months in Auschwitz when he was deported to Kaufering, a subcamp of Dachau. After an unsuccessful escape attempt, he was liberated by American troops on April 27, 1945.

Sick and weighing only 70 pounds, he convalesced at a hospital, where he began painting scenes from Auschwitz, as well as landscapes.

“Much later, looking at my landscapes I noticed that there were walls and fences in many of them,” he was quoted as saying by the Defiant Requiem Foundation, which honors the prisoners of Theresienstadt. “It taught me that the memory of the Shoah was a part of me, and that it would not go away, and that I would have to live with it.”

After returning to Prague, Mr. Terna reunited with Stella Horner, his girlfriend. They married in 1946 and moved to Paris, where he studied art and worked as a bookkeeper for the Joint Distribution Committee, a Jewish relief agency. They left for Canada in 1951 and later moved to Manhattan. (They would divorce in 1975.)

Mr. Terna was not part of the Abstract Expressionist movement that had taken hold after the war, but he adapted it to his artistic vision, particularly in his use of sand and pebbles to create texture in his canvases. In addition to his Holocaust art, which he began in the 1980s, he painted circles as symbols of life’s continuity and representational pieces depicting angels and biblical stories like that of Abraham and Isaac. 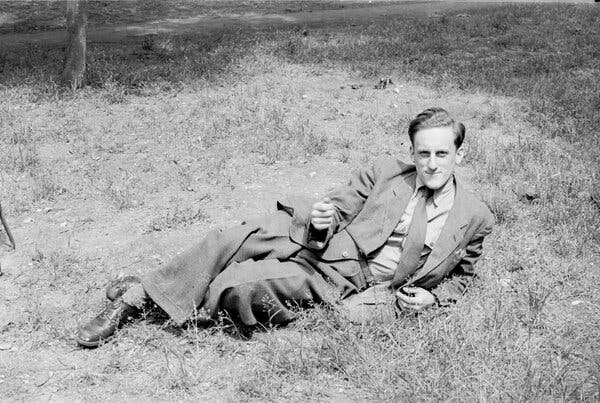 Mr. Terna in 1946. He began to draw when he was a prisoner at Theresienstadt, and he buried his sketches in a tin box under the barracks floor.Credit...via Daniel Terna

He never became famous, but he made a living as an artist, with occasional freelance jobs like designing wallpaper. “He sold his paintings at frame shops, to people in the neighborhood, to therapists looking for paintings in their offices,” Daniel Terna said.

In addition to his son, Mr. Terna is survived by his wife, Rebecca Shiffman, a child of Holocaust survivors, with whom he lived in Brooklyn.

After he and Dr. Shiffman, the director of maternal fetal medicine at Woodhull Hospital in Brooklyn, married in 1982, they spent their honeymoon in Israel and visited a kibbutz that had a museum dedicated to the memory of victims of Theresienstadt.

Mr. Terna had been searching in libraries and archives for his drawings, which he had not signed because he did not want to be identified.

In 2017, in an email to a German researcher, he recalled his thoughts before visiting the museum: “If any of my work survived, it probably is ascribed to another artist. If that was the case, I would be satisfied. The record is more important than the originator.”

The record, at least a small part of it, had survived.

“The curator did not know specifically what was in storage, but allowed Fred and Rebecca to look through the boxes,” Julia Mayer wrote in “Painting Resilience: The Life and Art of Fred Terna” (2020). “In the middle of a file of unidentified art, they found six of Fred’s works.”

Richard Sandomir is an obituaries writer. He previously wrote about sports media and sports business. He is also the author of several books, including “The Pride of the Yankees: Lou Gehrig, Gary Cooper and the Making of a Classic.” @RichSandomir

Chin people of NW Burma sing--We are the world-- to draw attention to current atrocities by junta.

Interview by Garfunkel + My Ph.D. dissertation + my Asian Survey article +

https://www.richardjgarfunkel.com/2008/05/21/the-advocates-human-tragedy-5-21-08/
https://repository.upenn.edu/dissertations/AAI3116650/
https://online.ucpress.edu/as/article-abstract/35/11/1030/23207/Theories-Paradigms-or-Models-in-Burma-Studies?redirectedFrom=fulltext
Well, at least Dr Sein Win, longtime PM of Burmese Democratic Govt in Exile (NCGUB) said to me on phone last year
"I was just saying, among all those who came to work with us, you were the best and the brightest."
Thank you for that opportunity.  It was life-changing.
Dr Sein Win is the son of U Ba Win, brother of Bogyoke Aung San, (Daw Aung San Suu Kyi's father and founder of modern Burma.)
Both brothers were killed in the mass assassination just before Burma obtained Independence from Great Britain.
We should take time to remember their Sacrifice and try to make things better, no matter how grim things are today.
After all, we only have one life each, not nine as cats are supposed to have, maybe because they handle falls so well.
Kyi May Kaung (Ph.D.)
2-4-2023 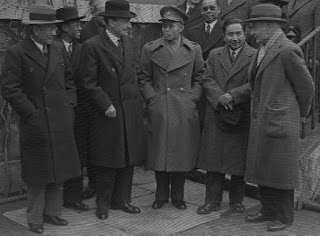 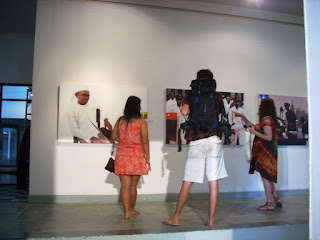 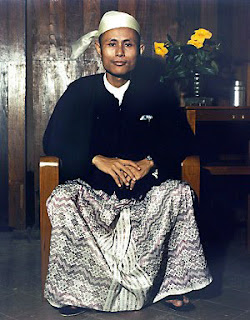