Estimates by Vanity Fair.
Posted by Kyi May at 11:30 AM

From Politico.com and Channel 7 news --

This is from Saturday Night Live Comedy show -- from Huffington Post

I really could not tell the actress Tina Fey from the Governor P.

Ancient city of Bagan (formerly spelled "Pagan") in Burma -- look at all the stiff and horrible "renovations."

In a way, I am glad all my mentors are dead -- otherwise they would be heartbroken.

The late Dr. Than Htun: "None of the temples are authentic any more in their upper portions."

But now it's worse. The junta gave "permission" to private donors to "renovate" and they tore down 10th to 13th century ruins and built things from ground up --

Few foreign scholars have spoken up about this.
Posted by Kyi May at 1:21 AM

Now is the time for action. We are working to ensure that this date doesn't pass unnoticed by the world.

Nelson Mandela was imprisoned for 27 years before he was released, and Aung San Suu Kyi shouldn't have to wait that long.

Mandela was virtually ignored by the world for the first two decades of his imprisonment -- we are making sure that doesn't happen to Aung San Suu Kyi.

Among the other things we are doing to help her (see below), we printed new posters of her that you can order on our website.

We are also sending you a powerful video we made earlier this year about her.

Here is what is happening right now:

1) Yesterday, the United States called for the release of Aung San Suu Kyi and all political prisoners in Burma.

2) Additionally, the European Union called for her release

3) At a meeting of European and Asian leaders, it appears that Euro/Asian countries will call for her release, including China

4) Aung San Suu Kyi's first cousin Dr. Sein Win and her attorney Jared Genser, who represents her at the UN Working Group on Arbitrary Detention, published an opinion piece that has been published in multiple newspapers

5) Most importantly, the UN Secretary General had said he would travel to Burma by the end of this year to secure changes in Burma. Now, it appears that he may be trying to back out of this trip for fear of failure -- don't let him give up on this trip -- send him a message today!

6) In Washington, DC and London, human rights activists are holding demonstrations in front of Chinese embassies. China is the Burmese regime's #1 ally, and they need to do more to secure peaceful change in Burma.

7) Today, the creators of The Trouble with the Alphabet , a photographic journey through the alphabet that illuminates the world's injustices from the point of view of a child, will launch their compelling new exhibit to celebrate the book's release at the Ditto Gallery in downtown Denver. If you buy the book, you can designate US Campaign for Burma as the beneficiary and we will receive 10% of the profits.

8) Students across the United States are participating in events to help raise funds to free Aung San Suu Kyi and all the people of Burma.

While we are doing many things, we have much more work to accomplish. Thank you for your interest in our work -- we are asking you to continue to support our efforts.

Become a member of the United States Campaign for Burma today.

Dear Friends of Burma in the DC Area,

I wanted to send you a last minute reminder about today's demonstration for Burma.

We, and many others around the world, are organizing demonstrations at Chinese embassies. Will you join us?

China is the number one supporter of the military regime in Burma, again and again preventing the UN from taking meaningful action to set Aung San Suu Kyi and the rest of Burma free.

Incidentally, Friday October 24th also marks the 60th anniversary of the UN charter, known as "UN day". Help us hold the UN to its promise by taking action for Burma.

The embassy is located at: 2300 Connecticut Ave NW, Washington, DC 20008. It is between the Dupont Circle and Woodley Park metro stops, off of Connecticut Avenue. The demonstration will begin at 5pm.

I look forward to seeing you there!

The Burma Border Consortium reports that 66,000 in Burma displaced in last year alone --

The statistics can't get more reliable than this. TBBC feeds refugees in the camps along the Burma-Thai Border and has done so since at least 1997, when I first met Director, Jack Dunford.

You see what a weak case ICG has when it recently called for a regularization of aid on grounds that that alone would create democracy.

The junta has learned to play the game and plays it "well."

Even long time dissidents have been taken in and speak as if 2010 were some magic number.
Posted by Kyi May at 8:31 PM

http://www.timemap.net/~hudson/pagan.htm
Posted by Kyi May at 3:09 PM

World art prices expected to drop through the floor --

http://www.mizzima.com/news/regional/1179-wanted-monk-flees-to-thailand-border.html
Posted by Kyi May at 12:32 PM 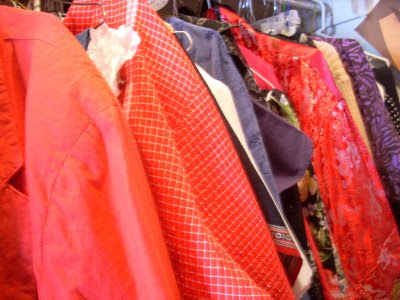 Interesting article which argues for "more than non-violence" in Burma -- by "Norman Robespierre."

I don't agree with everything this author behind a pseudonym says,but it does reflect the level of frustration felt.

I don't see how members of opposition could say they use violence, even if they did.

These days even a one ring-circus is Big.

http://www.pw.org/content/censored_stories_report_literary_myanmar
Posted by Kyi May at 11:59 AM

Obama says Powell will have a role in (his) administration --

Could the world be any stranger or the photos any better?

Obama likely to become next President of the United States -- by Charles M. Blow 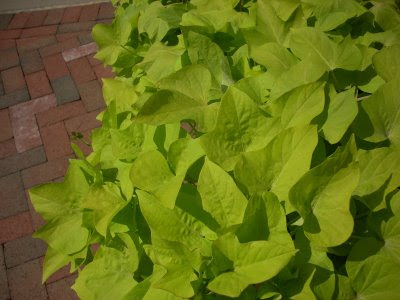 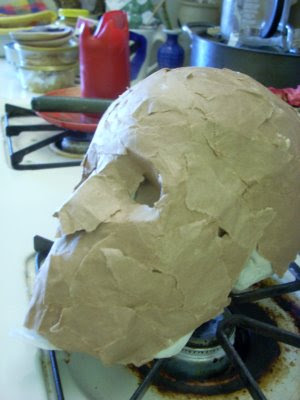 "He was from China" art work and photo copyright Kyi May Kaung.

One man's journey from a middle-of-the-night grand mal seizure through cancer treatment and brain surgery to a survivor's new normal. Part curiosity shop, part medical illustration, and part memoir, the exhibit is an experiential travelogue of a trip, nine years and continuing.

http://news.yahoo.com/page/election-2008-political-pulse-souring-on-mccain
Posted by Kyi May at 2:01 PM

Don't take "Burmese medicines" which contain mercury. A Burmese doctor told me this.

Gen Saw Maung is said to have died of mercury poisoning. He had tremors and made erratic statements and allegedly it was all due to self medication.
Posted by Kyi May at 10:33 AM

What radio should be -- sample from Democracy Now with Amy Goodman --

Excellent use of 59 minutes which Burmese language radios would do well to emulate. 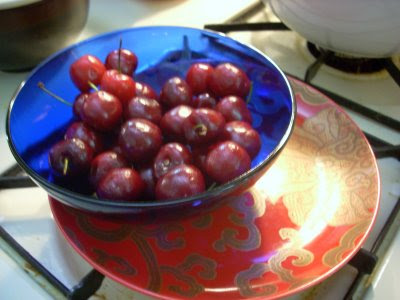 Red plate made in China and cherries from where? Photo copyright Kyi May Kaung

The Theory of Comparative Advantage explained a lot, but Krugman's work has explained country specializations and trade better.

Krugman said countries fall into trade patterns also by chance and then economies of scale take over.

Think of China's increasing role in African trade and investment.

My Skull by Kyi May Kaung -- 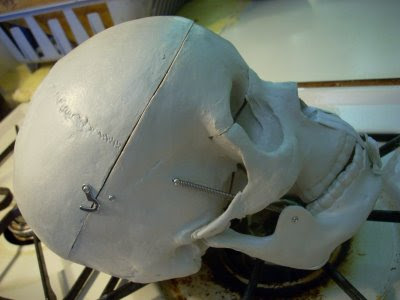 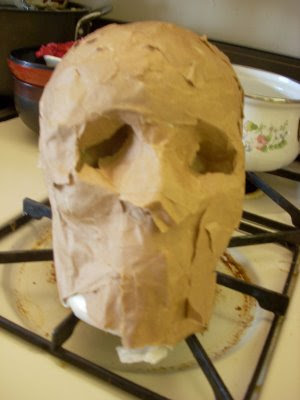 When A. dropped off the skull, I was afraid to open the box for a few days, in spite of being born into a Buddhist culture. When I unwrapped it, the plastic felt slimy. The screws, especially the big one, the open-up top, the hinges and the teeth bothered me. So I quickly covered them up with torn up brown paper bags from Chinese takeout food, using a pot of home-made glue. I covered the mouth because of the teeth. Now it looks like an Egyptian mummy that can't talk.

Copyright Kyi May Kaung.
Posted by Kyi May at 9:53 AM

http://afp.google.com/article/ALeqM5gSPdAm7MB3SAzyoRRBIcmB-b5CIA
Posted by Kyi May at 2:49 PM

on Bolivar Peninsula, in Texas --

Maybe anyone else might not have recognized it.
Posted by Kyi May at 2:34 PM

http://www.mnsu.edu/emuseum/prehistory/latinamerica/south/sites/machu_picchu.html
Posted by Kyi May at 1:20 PM

Never yet seen in the flesh.

And another blue poppy shot --

It's worth dying after you've seen a blue poppy once.

Make sure to watch the video clip of his speech --

In my view, Obama makes the most sense and has the best grasp of economics of the two presidential candidates. The rabble is frightening and a presidential nominee should not resort to such tactics which could get out of hand.

An interview Friday night of George Soros on Bill Moyers Journal was the most enlightening about what is happening.

I don't know anything about this other than what I read here -- but this data base seems worth checking out.

Gareth Evans of International Crisis Group on Responsibility to Protect

What the farmers have is called a usufruct or land-use right, they don't actually own the land.

This was the cornerstone of Deng Xiao Ping's successful economic reforms which began in 1978.

The victims look so fat and actually have brick houses, compared to the victims of Cyclone Nargis in Burma. And the aid actually arrives.
Posted by Kyi May at 6:25 PM

Another loss -- a relative dies of cancer in Burma -- 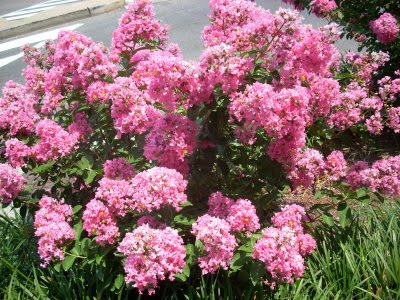 The Grim Reaper is Always Grim.

She wanted to be an actress, so my father took her to see A1 Studios.
She married well and had four children.
She nursed the twins through dengue haemorrhagic fever.

She was always well groomed and had taste in her clothes.
You could not tell she had cancer and was dying.

She always stayed in touch.
She listened to me on the radio.
She wanted change.

She introduced me to someone famous.
She sent me Maddhi Dewi's Ode to the Himalayas and asked to see
my translation.

Her brother also died of cancer.
Her mother died of Alzheimers, in her house.

Her daughter says she "suffered a lot before
she let go of her life
but she did not suffer long."

Poem copyright Kyi May Kaung.
Posted by Kyi May at 1:15 PM 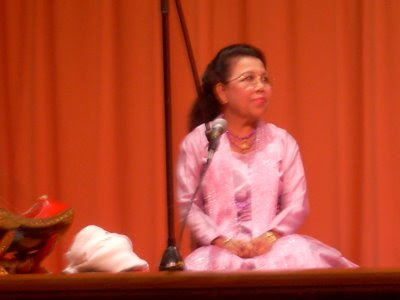 Photo copyright Kyi May Kaung.
Posted by Kyi May at 4:12 PM 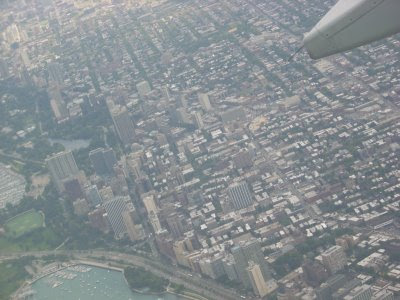 Photo copyright Kyi May Kaung.
Posted by Kyi May at 4:06 PM 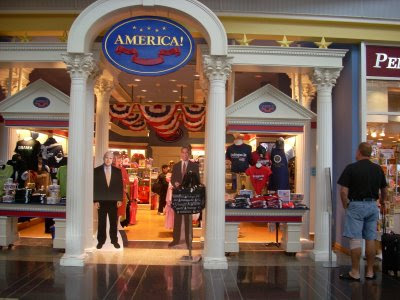 Paper cutouts at an airport -- Why no Joe Biden? Photo copyright Kyi May Kaung. 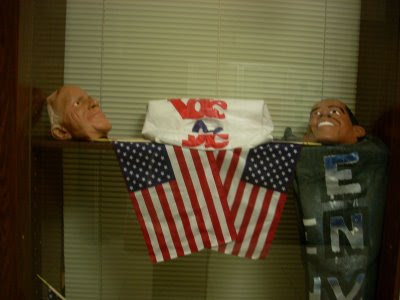 On a shelf in dorm in a Mid-West college -- photo copyright Kyi May Kaung
Posted by Kyi May at 3:54 PM

Htein Lin's Art -- I think this performance piece is called "September" but art itself is "Crossings." 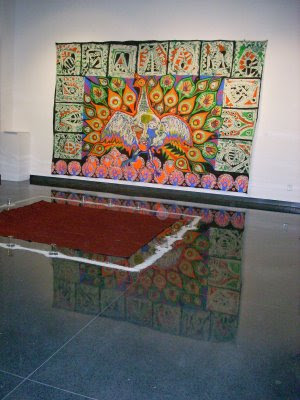 Set up for the performance. 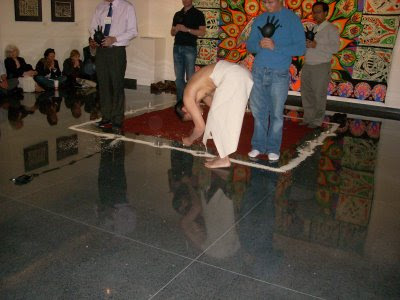 Near the beginning of the performance. 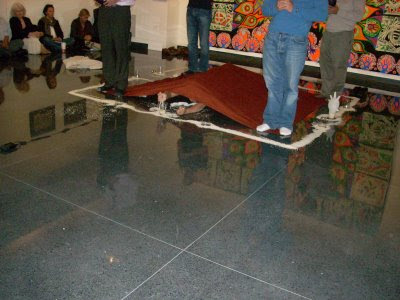 Middle of the performance. 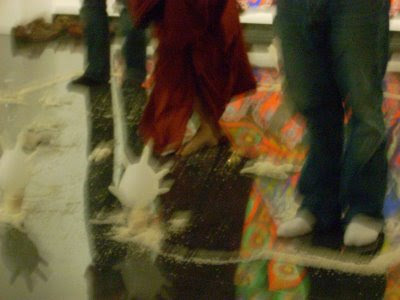 Near the end of the performance. 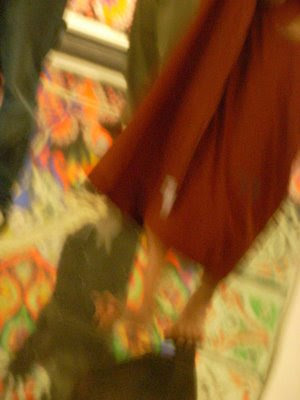 All art and performance itself copyright Htein Lin, photos, copyright -- Kyi May Kaung
Posted by Kyi May at 1:33 PM