http://www.csmonitor.com/World/2010/0329/With-Burma-election-boycott-Suu-Kyi-party-risks-breakup
Posted by Kyi May at 3:30 AM

http://www.bangkokpost.com/opinion/opinion/35264/suu-kyi-throws-a-spanner-in-junta-poll-plan
Posted by Kyi May at 3:28 AM

My human rights art will also be on display through end April with work of Anne Marchand and Jeremy Austin.
Posted by Kyi May at 11:02 AM

Suspected Chechen suicide bombers blow themselves up on Moscow subway

http://news.yahoo.com/s/ap/eu_russia_subway_blast
Posted by Kyi May at 8:16 AM

http://www.enigmaimages.net/index.html
Posted by Kyi May at 10:38 PM

http://poetrywithmathematics.blogspot.com/2010/03/queneau-and-oulipo.html
Posted by Kyi May at 10:13 PM 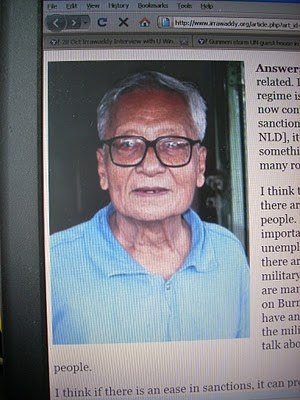 http://drzawmyintmaung.blogspot.com/2009/01/my-prison-life-with-u-win-tin.html
Posted by Kyi May at 7:01 PM

"Kyi May Kaung: Burmese dissidant and human rights advocate Dr. Kyi May Kaung will discuss mass human rights abuses leading up to Burmese so-called election of October 10, 2010. She is planning on bringing Ms. Wa Wa Maw, the fiance (sic) of a US Citizen now sentenced to 3 years + in Burma for his activities. (60 minutes) (Taste of Jerusalem)"

Note: Nyi Nyi Aung was released and deported back to USA by Burmese junta in March.

Kyi May Kaung "Scream Louder:" A poetry reading of Dr. Kaung’s own and other dissident poetry. Dr. Kaung is a Burmese dissident, whose poetry has been anthologized in Norton ‘s "Language for a New Century," as well as in Counterpunch, Glass, Poet Lore, Asian-American Poetry etc. She is also profiled with Thich Hnat Hanh, Yoko Ono and others on MAP (Museum of American Poetics).

Spoonerisms in U Win Tin's prison memoir "What's That? A Human Hell."

Would be fun to translate.

I tried a few.

Also UWT is full of internal rhymes in sentences.


Yes, I have been thinking of writing a review too. Very unusual use of Burmese language, quite frank. And poetic.

Pushing the Envelope: Art in Burma.

Nyi Nyi Aung freed and back in MD.

“As in the well known Burmese nursery rhyme Jah-Eh, which runs in an unending vicious circle, the Burmese people are still crying.
“Although the addendum activism to the revolution is trying to pull us out of the darkness through the hole in the wall, we are still hanging there stuck, our legs half in, half out.
“The monkey on the shrine shelf is still running up and down.”

http://internationalcampaignforfreedom.blogspot.com/
Posted by Kyi May at 1:38 PM

Christian Solidarity Worldwide (CSW) warmly welcomes the decision by the British Government to support the establishment of a UN Commission of Inquiry to investigate crimes against humanity and war crimes perpetrated by the Burmese regime.

Britain’s Ambassador to the United Nations, Mark Lyell Grant, said yesterday that Britain would support the referral of a case to the International Criminal Court (ICC). Responding to the recommendation made by the UN Special Rapporteur for Human Rights in Burma earlier this month, for the establishment of a commission of inquiry, the Ambassador said: “Because Burma is not a state party to the ICC it would require the Security Council to make a reference, and I don’t think the Security Council is sufficiently unanimous in its view to allow such a reference to happen. We of course would support such a reference.”

Speaking in the House of Lords yesterday in response to a question from Lord Alton of Liverpool, Government minister Lord Brett said: “We strongly support the rapporteur's recommendation, but if we are to press the issue it is important to do so in a way that carries support within the Security Council and not to fall victim to veto or lack of support, as that will be seen in Rangoon as a victory for the military junta. But we are strongly supportive of it and are seeking support.”

CSW has advocated a UN commission of inquiry for several years, and earlier this month released fresh evidence of the regime’s gross violations of human rights in eastern Burma following a fact-finding visit to the Thailand-Burma border. CSW reiterated its call for a UN investigation into crimes against humanity and war crimes in its report released earlier this month.

CSW’s East Asia Team Leader Benedict Rogers said: “We are delighted that the United Kingdom is showing leadership on this issue, and has pledged strong support for the Special Rapporteur’s recommendations. We urge the British Government now to devote energy and resources to building an international coalition to take this forward, working with countries such as Australia which have already expressed support. It is vital that in the run-up to the regime’s fake elections, its crimes against humanity and the prevailing culture of impunity in Burma are addressed by the United Nations, and action is taken to end the regime’s campaign of rape, forced labour, torture, destruction, killing and terror.”

CSW is a human rights organisation which specialises in religious freedom, works on behalf of those persecuted for their Christian beliefs and promotes religious liberty for all.
Posted by Kyi May at 1:26 PM

This presentation compares and contrasts pro-democracy
struggles in Iran and Burma, with a focus
on the planned 2010 elections in Burma (Myanmar).
Posted by Kyi May at 12:59 PM

Weydenfeld's daughter is in my Friday brunch group, run by Nita Congress.
Posted by Kyi May at 10:30 AM

http://www.thisisdiversity.com/articles/all/4309/amnesty-international-human-rights-arts-festival--save-the-date/
Posted by Kyi May at 10:53 AM

Irrawaddy cartoon -- "Out of the mouths of dictators."

Dannie Abse awarded me the Williams Carlos Williams Award of the Academy of American Poets in 1994 when he was judge.

I entered the first five poems I wrote.

http://chinlandguardian.com/news-2009/917-burma-appoints-election-commission-as-canada-slams-junta.html
Posted by Kyi May at 12:01 PM

How to paint on silk

Best one stop shopping -- Dharma Trading Co.
Posted by Kyi May at 6:40 PM

and again she responds with the utmost dignity and truth.

http://www.google.com/hostednews/afp/article/ALeqM5icOLiWSd_QnKWNG9vA6qpOlsluuQ
Posted by Kyi May at 12:15 PM