http://himalmag.com/component/content/article/5083-black-belt.html Himal has a print and on line editions. It is extremely well-regarded, like Time Magazine or Indonesian Tempo. Dixit who wrote the article about Daw Aung San Suu Kyi and the Rohingya is the founder/chief editor. Last year they commissioned an article from me - which I titled Potemkin Politics. KMK
Posted by Kyi May at 7:58 PM

http://india.nydailynews.com/newsarticle/50128b00c3d4ca7205000001/aung-san-suu-kyi-facing-backlash-for-refusing-to-condemn-latest-burma-abuses
Posted by Kyi May at 10:21 AM

Good. Now you've heard it from Larry Diamond, you'd better believe it. I and a few others have been saying throughout that all the sanctions should not be lifted too soon. I myself am of the opinion Burma: Reforms? What Reforms? As Prof. Diamond has pointed out, and so has Daw Suu, this is only the start, a lot more needs to be done. In the winter of 2008-2009, I acted as Coordinator for 5-6 well known (and well regarded)experts on Burma in money and banking, agricultural economics, civil and military relations, macro economics and constitutional and electoral law to draft a Plan for Democracy and Development for the National Coalition Government of Burma (NCGUB - or the Burmese Democratic Government in Exile) which you can still find on their website. Since Sept 2011, you media types were so drunk on the change rhetoric yourselves and getting a foothold inside Burma, that you never even bothered to read those 20 pages. While I worked on the Plan for Democracy and Development, I saw many reports by Diamond and others from the 90s onwards, which I advised the NCGUB/The Burma Fund to declassify and place on its website. The Plan does not specify how to get to the ideal state. I offered to work through step by step negotiation points with them, based on benchmarks which have been in place since the 90s, but NCGUB/TBF declined. In this way this Plan is like The Future of Iraq project which called on 200! Iraqi exiles for Transition ideas - see Washington Post's correspondent Rajiv Chandrasekaran's Imperial Life in the Emerald City, Inside Iraq's Green Zone, pp. 40-41. (chapter - Building a Bubble - A Deer in the Headlights) My 1994 dissertation of the stultifying effects of a top-down command economy and political system can also be read on line at Penn Commons. Kyi May Kaung (Ph.D.) 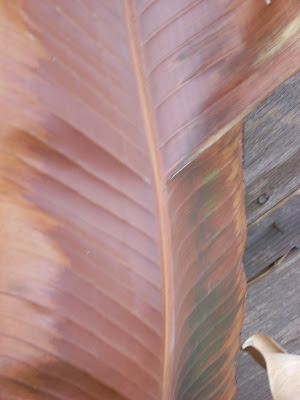 Bronze strelitza leaf - Copyright Kaung
Posted by Kyi May at 8:57 AM

Russell Banks talks about his novel Lost Memory of Skin

http://books.google.com/books?id=S5q7qxi5LBgC&pg=PA385&lpg=PA385&dq=moshe+yegar+burmese+muslims&source=bl&ots=tn2CuWPgax&sig=K9N_iuUqr3ot6E-fjNtP7-hecQQ&hl=en&sa=X&ei=-tIOUKvYAenE2wWJg4CwBw&ved=0CFcQ6AEwBQ#v=onepage&q=moshe%20yegar%20burmese%20muslims&f=false
Posted by Kyi May at 10:01 AM

http://www.mizzima.com/edop/interview/5607-nld-leader-win-tin-allowed-to-republish-his-books-after-33-years.html
Posted by Kyi May at 9:39 AM

http://www.cnn.com/2012/07/18/world/meast/syria-unrest/index.html?hpt=hp_t1 The deputy is Assad's brother in law. Analysts say this could be end of the Assad regime.
Posted by Kyi May at 5:17 AM

in Burmese -he's on the "advisory board" http://www.nmg-news.com/bur/index.php?option=com_content&view=article&id=415&Itemid=58 http://www.youtube.com/watch?v=AzS6hrcQKeY&feature=player_embedded What use are these platitudes and generalizations from this self styled "sayagyi" why is the reporter just accepting every "wise saying" he says? Why did Payap U and Irrawaddy and Burma regime for that matter, give him "the time of the day?" So what's the "appropriate pace" of reforms and what are they? Never answered any of the Qs he posed himself. Waste of time and energy from a "san kone myay lay" (wastes rice and makes the world heavier) --
Posted by Kyi May at 5:05 AM

Siamese King Uthonpom's grave near Mandalay, Burma to be destroyed

http://www.irrawaddy.org/archives/9398 Uthompom was retired in a monastery when Hsinbyushin invaded Ayuthia in 1767. He was pulled out of the monastery and taken to Burma, where he died. The present Burmese military regime is making this great move for Thai-Burma relations. Brilliant.
Posted by Kyi May at 4:40 AM

http://www.timemap.net/~hudson/Hudson-2011-RoyalBronzeModels18thCenturyBurma.pdf
Posted by Kyi May at 11:39 AM

As Cambodia goes, so goes Burma - Emperor has No Clothes

Bangkok Airport of smiles in Crisis

http://asiancorrespondent.com/85867/bangkoks-airport-of-smiles-in-crisis/
Posted by Kyi May at 11:29 AM

http://www.nytimes.com/2012/05/02/arts/design/helmut-lang-prepares-an-art-exhibition.html?pagewanted=all
Posted by Kyi May at 9:28 AM

http://www.nytimes.com/2012/07/13/nyregion/sacred-white-bison-is-born-in-rural-connecticut.html
Posted by Kyi May at 4:07 PM

http://www.nytimes.com/2012/07/13/arts/design/yayoi-kusama-at-whitney-museum-of-american-art.html?pagewanted=all
Posted by Kyi May at 4:06 PM

http://thecable.foreignpolicy.com/posts/2012/07/11/obama_breaks_with_aung_san_suu_kyi_lifts_burmese_investment_ban
Posted by Kyi May at 3:33 PM

http://catchingdays.cynthianewberrymartin.com/2012/04/01/how-we-spend-our-days-william-lychack/
Posted by Kyi May at 3:26 PM

Why racial purism theories (in Burma) are bunk

http://www.tuninst.net/Myanmar/Folk-elements/ancient-Pyu/Pyu-homeland.htm here's the archaeological evidence on Indian and Chinese influence since time of Pyu in Burma see also note on DNA. FYI, this compilation was made inside Burma - a lot by Myanmar Historical Commission researchers and also international researchers such as Bob Hudson and Janice Stargardt. Tun Aung Chain was/is the mentor of Ne Win Mrs/widow Daw Ni Ni Myint. -*
Posted by Kyi May at 11:06 PM

http://www.guardian.co.uk/news/2002/dec/06/guardianobituaries The man who founded Burmese Army Inc. --
Posted by Kyi May at 8:10 PM

http://www.asterism.info/photos/old/ Is this sad or is this what? And who is responsible? We know the answers. kmk

U S oil and gas will work with MOGE in Burma

This is how much a book review costs

http://www.kirkusreviews.com/indie/about/ as it could take about a week or more to read the book, and at least 2 days or one to write the review and that magazine publishers hardly pay for anything these days, this sounds reasonable enough. It is about 1/2 of the real costs. And one has to like the book, or hate it, in the first place. At least read it. One editor thought I'd love the book, in fact it had such a bad odor I regretted buying it at hard cover price and never finished reading it, did not feel like it. Don't know now where to chuck the much lauded but useless book. Maybe I should use it as a door stop. On principle I don't review fiction set in Burma because find it limp and unconvincing. And sometimes I decline because I just don't have time - for e.g. to download a whole 2 hour documentary or because I had other things to do, like look after myself. For those of you who thought my book review led to a certain book being made into a movie, you flatter me. Optioned books may never see the silver screen, but the option is bought already (one famous area writer and writing teacher regular tells us in class how his book was made into a movie without his knowledge - he is now suing the movie makers) the book I had not reviewed yet at the time, was liked by a famous actor due to the efforts of the author's agent and marketing PR. And sometimes, to be frank, some people get too pushy and I hate being pushed, so I push back. How dare you say you will call me at 8 PM tomorrow and would I please have the book review ready by then. And you left a message! This does not apply to those of you who sent me books, but which I can't review yet either because 1. They are very heavy books that are hard to read, even for me, i.e. heavy technically, and then events move fast so I get to writing other things 2. Logistical reasons in that the book maybe somewhere else from where I am. 3. However if you are over 80 and spent 19 years in prison, I would make an exception for you. Maybe I could take a plane to go get the book back, yes? 4. This reminds me of the former friend who got her nose out of joint because I did not review her book (self-published) as I was in process of being pushed out of one job. She did not give me a free book. As the book was self-published, I'd have to order her book sight unseen at the bookstore, it was not displayed on the shelves. So I can understand the friend who could not give me a review copy, as she had given away too many already, she said. And I believe her. But as I was too poor to buy the book so I never got to read it. However, another mutual friend came to see me, and spent time with me, even though I told her my review would be broadcast in Burma in Burmese and probably would raise her sales zero %. She even patiently recalled from memory the first paragraph of her bestselling book and recited it for me, can you beat that. The story I love best was of a German-born woman who was asked to review a book in German, and again, "I'll call you tomorrow for your ideas." kmk Balloon floats over 11th century temple in Bagan, Burma. Frame grab.
Posted by Kyi May at 9:12 AM

http://www.mizzima.com/edop/features/7457-thai-artist-shows-kinship-to-burmese-artists.html
Posted by Kyi May at 5:31 PM

http://www.irrawaddy.org/archives/8584 time for reform touters to wake up.
Posted by Kyi May at 7:53 AM

http://www.washingtonpost.com/entertainment/books/wattpad-gives-writers-a-place-online-to-tell-their-stories/2012/06/28/gJQAZFvgBW_story.html
Posted by Kyi May at 10:36 PM

Piano woman who was in Rangoon in 1947 when Aung San, father of Aung San Suu Kyi was assassinated -

http://www.telegraph.co.uk/sport/olympics/9374258/London-2012-Olympics-Muhammad-Ali-and-Aung-San-Suu-Kyi-considered-for-opening-ceremony.html
Posted by Kyi May at 1:32 PM

The Magic Flute by Mozart

http://www.youtube.com/watch?v=tlhbFk2GbcY&feature=related
Posted by Kyi May at 4:29 PM

http://www.youtube.com/watch?v=pjwoplZTmog entire play spliced together one hour and 36 minutes.
Posted by Kyi May at 9:29 PM

http://www.dailyscript.com/scripts/amadeus.html
Posted by Kyi May at 7:08 PM

http://www.youtube.com/watch?v=qXahJYGkYX4&feature=related conducted by Hebert von Karajian
Posted by Kyi May at 11:24 AM

http://www.mizzima.com/news/inside-burma/7442-humperdinck-to-appear-in-rangoon.html
Posted by Kyi May at 9:43 AM

http://glimpse.org/category/editorial-blog/
Posted by Kyi May at 10:39 PM

http://frugaltraveler.blogs.nytimes.com/2012/06/26/a-100-weekend-in-oslo/ a little late to try this this summer, but this guy actually saw Daw Suu giving her Nobel Lecture. -- this is strictly advice for only summer visits. - it could still be cold. I was in Helsinki in June in a hotel, and it was cold. *
Posted by Kyi May at 10:04 PM

http://www.oxbridgewriters.com/essays/international-relations/theories-and-theorists-in-nationalism-studies.php
Posted by Kyi May at 1:40 AM