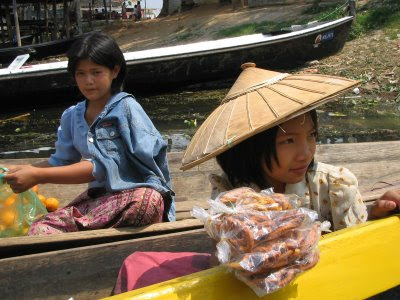 This article in The Washington Post confirms what I have been writing and saying.

1. Most of the aid supplies will be stolen by the junta.

2. Civil society and independent groups are forging new ties between the Delta and Rangoon.

3. The military government is making new rules and tightening its control but out of all of this, the new relationships are a net gain.

4. I believe it was a mistake for the international community not to tie the release of Aung San Suu Kyi and other political prisoners to the delivery of aid. NLD and others were the ones who could help monitor the aid delivery.

5. The junta is actively obstructing and arresting private citizens who have helped in aid delivery, and has brought its thugs out again to attack Suu Kyi supporters.

6. Citizens have had to jump in to do everything themselves and are exhausted. The military junta has lost all legitimacy.

I made point 1. in an article in Wild River Review immediately after Cyclone Nargis struck.

I have been talking about points 1-6 since in Helsinki, at E-W Center and in an interview with RFA. The RFA reporter asked me why the junta needs to care. Well, it does not need to care, it is at its most dangerous now -- flush with cash and power.

All totalitarian systems eventually fall, usually, in case of Hitler and Pol Pot's regimes by outside intervention. The Hitler regime could not keep up its control or army as its economic base declined under the slave system(forced or conscripted labor)it instituted. One of the most evil of all regimes, the Pol Pot one in Cambodia, lasted only from April 1975 to Christmas Eve 1978 when Vietnamese forces launched a massive invasion of Cambodia. See chapter Cambodia since 1945 pp 237-260 in Ian Mabbett and David Chandler, The Khmers, Blackwell,1995.

Post war West Germany was helped by the Marshal Plan. After reunification, Germany is stronger. The European Union, formerly known as the European Common Market, has widened regional markets, unified the currency. Cambodia today is much different from the Khmer Rouge era.

Burma will change, the days of the military regime are numbered.

Copyright Kyi May Kaung.
Posted by Kyi May at 3:55 AM