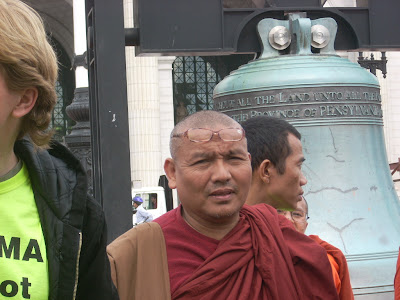 For long time dissidents and Burma watchers in the DC area, this Hearing set our minds a bit more at rest than the earlier Senate Hearing with Jim Webb.

Some dissidents including me felt it was not so urgent for us to attend this Hearing as we trusted all 3 Witnesses.

According to the article cited above from Irrawaddy magazine, Tom Malinowski said that if sanctions were lifted, only the extractive sectors of oil, gems, gas and timber would "open up."

Aung Din of US Campaign for Burma said the new US policy should not be open ended.

He said that if regime continues arresting democracy activists, attacking ethnic minorities, the US must respond with tightened sanctions, actions at UN Security Council, such as global arms embargo and the establishment of an inquiry to investigate crimes against humanity.