Quanah Parker was the last war chief of the Comanche Nation and the son of Peta Nocono and his white Anglo-wife, taken as a captive when she was 9--Cynthia Ann Parker--

This is an amazing story of survival in the face of mass, state-sponsored genocide of the American Indians.

I urge you to read all the classics of Native American history, such as Bury My Heart at Wounded Knee, by Dee Brown.

you can start there, as I did 2 years ago, and keep reading--

Especially at a time like this of neo-nazism and white supremacy, kkk, white extreme "nationalism"

we need to remember that the Native Americans were quelled by guns germs (smallpox, cholera, syphilis) and steel (the Walker Colt six shooter).

I was recently asked by the "blind man" who came with a ladder to fix my stuck blinds, if I was Native American.

I don't know how he channeled that--maybe he saw some of the books I was reading.

It is my firm belief that any person, especially artists and writers, can identify with anyone or anything they wish, even inanimate objects (My Name is Red by Nobel Laureate Orhan Pamuk).  Incidentally, the Turkish govt accused Pamuk of "insulting Turkishness" because he said that the Armenian genocide really happened--

and animals, my novella Beast. 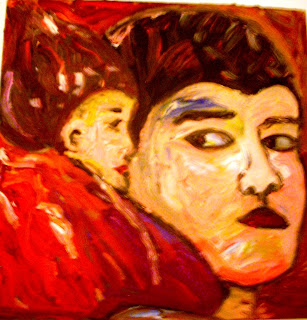 Paintings by Kyi May Kaung--Copyrighted. 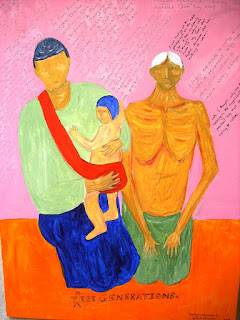 white is just a color, it is not better nor worse than any other color.