yeah--another one up for Truth& Democracy

He said he "recused himself from Trump campaign."

Unsure whether he will remain in his A G post.

I think surely but steadily T is going towards impeachment.

Months ago, someone wrote "He will die in prison,"

Surely, T and cohort and family have lost their good name, if they ever had one, and their brand name, and Emoluments Clause will surely enter,

he is too involved in his own business and giving it to sons to manage is not  a true blind trust.

Great difference from Jimmy Carter, who lost 2nd bid for presidency due to Iran hostage crisis and is said to have found his peanut business under blind trust broke when he returned to private life.

The helicopter crashed in the first hostage rescue attempt.

What has happened in Yemen with 94 m plane deliberately destroyed is much worse.

and "golden showergate" much worse than MLK compromised with women, or Clinton with Monica Lewinsky

I think if he is impeached, his ego will not be able to stand it, and he will go completely crazy, already divorced fr reality now. 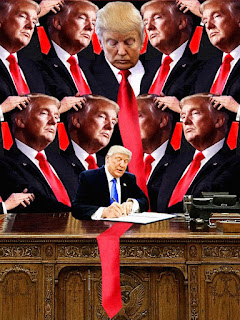