Burmese currency with my father U Kaung, "Maung Kaung"s signature on it, from good olde days of U Nu's government. 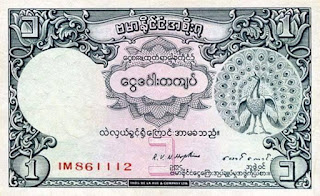 I do resent some fool's question from Facebook-- "But how did your father's signature come to be on it?" It did not "come to be on it" and he did not lobby for it. He had to sign as part of his duties for the Burma Currency Board when he was assigned there in London, c. 1947-1950, and Burmese currency was printed in the UK by Delarue and Co. From his official correspondence, which my mother gave to U Soe Saing, economist, the Burmese government and Delarue were very careful about the money supply. For instance, one letter that I looked at, asked for replacements for a few notes which had been partially singed in a fire. That's how careful they were. When one of my major economics mentors, Dr. Aye Hlaing, left his post because he was appointed chairman of the national bank under (Gen.) Ne Win, in his farewell speech to us at the Institute of Economics, he said he could not sleep at night because he (could not decline the post) and he kept seeing the money supply amount in his sleep. Kyi May Kaung (Ph.D.) 11-8-2017
Posted by Kyi May at 5:06 AM