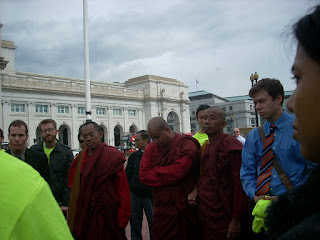 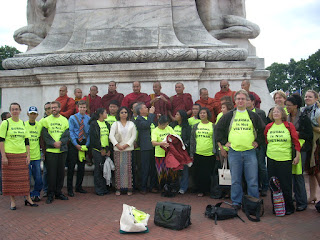 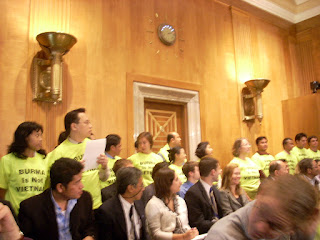 Activists before going to Webb hearing, 2009, photos, KMK They were starting their "two pronged approach to Burma policy." Later, Christiane Amanpour asked "my question." But Burma activism is almost dead now, with former groupies baking bread, doing pizza delivery and court and hospital interpreting. But before you sneer and heap scorn on people, think, could you do it.?? I think that people can do grass roots level jobs means they are uncorrupted, and anyway, it is not their fault. There is no shame in honest labor. All the funding fell away, everyone went to Burma, some jumping the fence and getting land in exchange. Up to 10 acres each and licenses to import cars, which are very rare in Burma. I know the names. Majority were people I had worked with before 2011, some even closely. As they say, "Time gives you the correct answer." So I think it is laughable when a family friend asked me, "If you benefited from (the exile govt.), when they are down can you suffer with them?" I did not "benefit" from a survival level NGO job. I stayed alive to write and paint another day. Since I did not benefit, there is no question of "suffering with them." We did nothing wrong, unlike the junta which has done everything wrong, caused countless deaths and social disruption. I wish fools who know nothing would just keep their mouths shut. Such as the women who asked if I got an advance for self published books, or if the jobs at Thai univs. were tenured. As far as I know, tenure track does not exist in S.E. Asia. Ask anyone who self-published how many copies they sold. In Burma, people get sinecures if they are related to someone, and similarly get fired if they are related to persona non grata. About 40 people are fired each time one person is purged politically. I have been told, many times, by people who worked in UN agencies, that to get a UN job, you need to be related to someone inside the UN. You need a Burmese passport. Another person asked/told me to be careful, the CIA would recruit me. Why? If anyone looks on CIA job site, they will see they only need Arab speakers. I've never seen an open source job for Burmese speakers. So please shut up. It's getting late and we are getting old and tired. When you get old, you lose patience. km Kyi May Kaung Words Sounds and Images
Posted by Kyi May at 1:07 AM