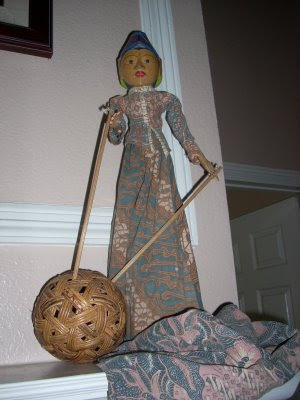 Indonesian stick puppet playing with a Burmese chinlon cane ball. Chinlon is a game played in a circle, all about keeping ball in the air. There are no winners nor losers, all about not allowing ball to fall and skill in catching it in joints; elbows, between neck and head etc. Text and photo copyright Kyi May Kaung.
*

As I pointed out when I debated Derek Tonkin on sanctions on BBC Hardtalk during the Saffron Revolution in September 2007,

It is a continuum like a line. From middle school math we know there are an infinite number of points on a line,

between sanctions (themselves all different sorts) and "constructive engagement" also on different levels. In between are many different "policy mixes" like different products a factory produces.

That's why people get stuck -- because they think policy is only one thing X or the other Y.

Think of Nixon and China and the start from ping-pong diplomacy and how much China has changed now, especially economically, to the point where China now holds bulk of US Treasury Bills and it's "Chimerica" in an economics sense.

I'm tired of this "remove the Burmese sanctions debate."

They won't get removed soon if junta continues this way.

No matter Daw Suu and NLD extend their hands always. They can't shake hands with empty air, or worse, with a bayonet.