The well-wedded sculpture and poetry of Mark Behme and JoAnne Growney, by Kyi May Kaung (Ph.D.)

A few months ago I went to a sculpture exhibit by Mark Behme, combined with a poetry reading by JoAnne Growney, at the Friendship Heights Village Center in Chevy Chase, Maryland, where it seemed to me the poetry and the sculpture went together very well, as my father used to say about lyrics that were “wedded” to the music. At the same time both the sculpture and the poetry were strong enough to stand up well on their own, thank you very much.
I have viewed other exhibits where poetry was displayed together with sculpture through wall-notes.
In this case, after I scanned through the twenty or so small sculptures by Mark Behme, most of carved wood and found objects displayed on a table, JoAnne Growney, who says she is named after her two grandmothers, Josephine and Anna, read her poetry in a careful and respectful manner from a podium.
Growney is known as a “math poet,” using her mathematics knowledge in her elegant poetry. I had met her a few years earlier at one of my own poetry readings. In their team’s process, the sculptures are on loan at Growney’s home, while she writes on her own. Behme works in the basement of his own home in Silver Spring, where he lives with his wife and a couple of small dogs, as well as sculptures he has carved and exchanged with others or had given to him by friends and neighbors.
To write this, I met up with both collaborators at Kefa Café in Silver Spring, MD and interviewed them, then we walked over to visit Mark’s home and studio.
A high point of visiting artists in their home studios, besides seeing how they make their art, is seeing the organic way in which artists live with their creations. Sculptures and furniture made by Behme were seamlessly integrated into the lived-in shadowy ambience of a small fifties cabin, built originally from a Sears do-it-yourself kit, Behme told me. For me it all harks back to a simpler time, such as when I was growing up in Rangoon, Burma, where we did things for ourselves. I also have a home studio where I paint and make papier mache constructions. Some of my favorites that I saw at Mark’s was a hefty side board and wine bottle holder, which he said was the first piece he ever carved. It features two types of wood, maple, his favorite, he said, and vine leaves carved on the front from African purpleheart. The other wow piece to die for was a carving of a nude woman as the backrest for a six foot high chair or throne which had a found iron grate as a seat.
Downstairs in the basement, Behme had his woodworking machines such as lathes behind a dust screen of transparent plastic and does his carving in the outer area. He showed us a guitar he was making, which had a stained purple streak running lengthwise down the right side. 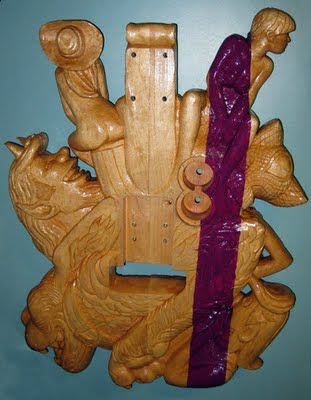 
All his electric guitars are made from quality components, which he buys from a supplier. As we left, we saw a new box just delivered by the postman. The musical instruments are all working guitars that can be played and have whimsical elements such as faces that only the musician can see as he or she plays. I thought this fantastic.
Growney’s poem Devil’s Music illustrates Behme’s guitar sculpture Nutjob, which features a gleeful devil’s face.

. . .
JoAnne Growney told me she had worked with different artists, but the art comes first. She reacts to it.
“Truth is hidden from us, but if we try sly tricks we can discover it. Mark’s sculpture is a tool for me. Both of us work alone, then meet and talk about the work. I saw one of Mark’s pieces (I FALL TO PIECES AND I CRY) exhibited at the Pyramid Atlantic storefront on Ellsworth Avenue, took a photo and wrote about it . . .”
The poem Lovely Love accompanies two tabletop size, brightly colored sculptures, Cupcake Boy and Drop-Dead Gorgeous. 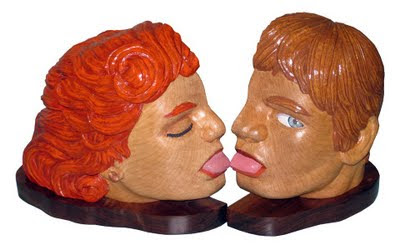 A beautiful girl and a pretty boy
are a match that’s bound to happen—
for both know how to kiss and tell
. . .
He brags that she’s drop-dead gorgeous;
he’s sweeter than chocolate, she cries.
Helpless voyeurs, we watch when they kiss
to see if they open their eyes.

Another of my favorites, Split Tales, depicts a girl with corded hair, who literally has two parts, dividing
from her waist up. One part is lying down while one is sitting up. 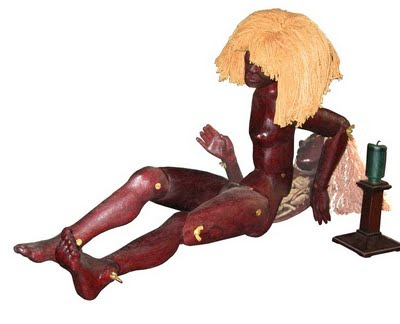 Which Girl Am I?

The girl who’s not forced to divide
into the good girl and the real one
is a lucky one. I was eleven
when I felt a crack begin.
In time I fully split—

At the exhibition and reading, the piece that most appealed to me, maybe because it is darkest and seems to capture the state of the politics of my home country, Burma, is called The Endgame. 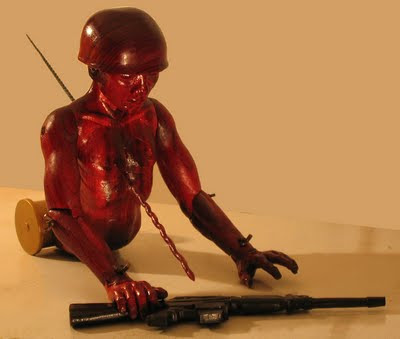 It shows the top part of the torso of a man curving up from an empty shell casing, and is pierced through and through with a long spiral screw of copper. The man is wearing a helmet.
In chess, as grandmaster Gary Kasparov writes, the end game is when both sides have few pieces left and are at the final stage. Inspired by the sculpture, Growney put together a composite poem of one-liners from her neighbors Elizabeth Behrens, Megan Benson, Talia Benson, Abi Daken, John Daken, Tom Jennings, Ed King, Joan King, Denny Shaw, Ann Taylor and herself.

It’s a grand finale to end this article and like all good art will live forever.

It’s over when hope is extinguished and either-ors expire.
It’s over when no poor, young American joins the armed forces to pay for a college education.

To see more of the sculpture of Mark Behme and purchase art work visit his website.
http://www.markbehme.com/index.html

JaAnne Growney's poetry is featured on her website http://joannegrowney.com.
where you may order copies of her poetry collections.

Kyi May Kaung is an award-winning poet whose poems have been featured in Norton’s Language for a New Century, Amnesty International and The New Internationalist’s Fire in the Soul, The Museum of American Poetics, Counterpunch, Glass, Poet Lore, Rattapallax, Poet's Attic and other publications. She has published two chapbooks, Pelted with Petals: The Burmese Poems and Tibetan Tanka. She is also a professional artist who has had nine international one women shows since 2002. Her 1994 doctorate from the University of Pennsylvania is in Political Economy.
at November 20, 2009