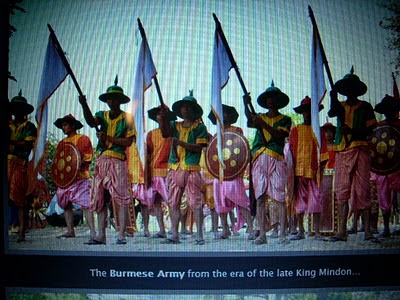 Re-enactment of "Burmese Kingdom" in Mandalay -- from Internet

I agree with what Zarni says and I am not a mono-theist!

They don't understand that in an equation there can be several independent (causal) variables & one dependent variable (Burma). (One English prof. talking about air crashes, did not understand difference between causality and correlation, & wrote same things that happened on date of crash must have caused it. Ridiculous.
2. Sanctions-engagement is a continuum, not on-off like a light switch(binary, zero-one ). See my BBC Hardtalk interview.
I explained it all in my Burmese paradigms and models article in Asian Survey in 90s.
Mono-cause leads to mono-theism "have one hammer and hit everything with it."
Non-profits ruled by catch phrases & key words.
My own mantra of "system change" is NOT mono-theistic, because system change involves many things, from the political institutions, to market prices, to floating exchange rates, to micro- and macro-economics.
Junta thinks "disciplined democracy & 2010 elections." It's PR, no real change intended.