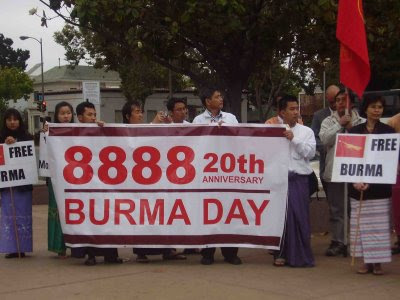 Demonstration in U.S.A. on 20th anniversary of 8-8-88 Revolution. Photo per kind favor of and copyright Maw Shein Win.

He is still in light blue prison garb, as a sign of his continued resistance.

He told VOA reporter he will continue (with his pro-democracy activity) -- he was 20 years in prison and when his sentence was completed at 16 years, he was "about to be freed," singled out by name by the army officer "I have read your writings, Saya," served dinner and then taken back to prison.

He said he was only allowed to read about 3 years ago, before that would scratch on floor with a piece of brick or reads scraps of newspaper that he came across.

Those of you who don't have Burmese please find a Burmese speaker near you and ask for help. Also as a way of networking.