This afternoon I saw President Thein Sein 2 feet away from me today./ A hell of a liar, I would say./ Remember how he lied with a perfectly straight face on BBC Hard Talk recorded in his hotel suite in New York in September about the Tatmadaw troops NOT committing any rape against ethnic minority women?/ I shared my conclusion, that Thein Sein is Naypyidaw's best-ever liar, with a close colleague who does negotiations with the generals. Here is what my friend wrote back:/ "I met a few generals, ex and current, quite up-close and personal. Listening to them make me sick in my stomach. But, I don't understand how others see them believable. Not only are they wicked, they are also so stupid (and this is understatement to describe their stupidity). They do not even pretend to change in front of us. I don't know where people see changes. They do what they have to do, all for themselves."/ Daw Aung San Suu Kyi judging Thein Sein to be the general she can do business with is a misjudgement of historic proportions./ That is not dissimilar to George W. looking into this KGB field agent Putin's eyes and proclaimed to have found a KGB's soul./ For the Lady's mis-judgement and miscalculation the people and the country will soon be paying a very heavy price. For the regime has incorporated her into their strategic game plan and calculations./ Here is Naypyidaw's division of labour:/ one group went to negotiate: ex-Major General Aung Min and crony Hla Maung Shwe/ another group was tasked to 'take care of the monks': Home Affairs/ yet another group was ordered to offer monks public apology - a performance/ then enter the Lady: she is being assigned to investigate the industrial dispute between the Chinese mining company and the local population./ President Thein Sein's job: to externalize any responsibility to anything that is bad - genocide, war against the Kachin, deliberately localized "police incompetence" "brutality" etc. and to normalize the regime's genocidal rule of Burma/ Posted with permission. 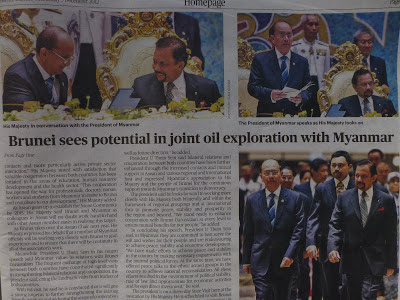