Footage of what Parkland Student Massacre survivors and Sandy Hook mother said to trmp--and what he has actually done. Make sure you watch this.

http://www.msnbc.com/rachel-maddow-show The cur has actually made it easier to buy guns. Ideally, you should watch The Rachel Maddow Show every night. d. j. t. just saw the survivors because he had to. In reality his right wing cheerleaders are saying the students, who have just buried their schoolmates and siblings are "crisis actors." How would he feel if buvanka, jared, and the youngest were shot. M.'s secret service protected trips and stays in NY before she joined him in WH alone cost taxpayer over 700,000. He makes an untold number of trips to his properties like Mar a Lago and Bedmington NJ all the time. Secret Service has already said it has run out of money (for 2017) If Salmon Rushdie could pay for his own security in UK during the fatwa--so can he. Meanwhile M has her nose out of joint bc yet another woman former Playmate says she had an affair with trmp. So she takes a motorcade to Andrews Air Force base to go to FL instead of riding the helicopter with her sugar daddy. And her parents have just got green cards. If that isn't chain immigration, what is? And his former bodyguard is being paid $15,000 A MONTH, to "plan an event 3 years from now, by which time he will amass half a million." Commentators said, "What do these people know that they are paid this kind of hush money." But don't worry, trmp admin has fired so many people, there are more than enough angry former employees, not to mention women, who will go on the record to tell their stories about "inside stuff" And does he think Putey will not keep the "pee tape." I wld too if I were P. And then use it when it's time to dump trmp and the time will come. This so-called presidency needs to fold. Mueller has filed new charges against Manafort and Gates. Oh yes, and trmpies and extreme R are livid bc Twitter has deleted many fake accounts, suspected of being bot run. When I was on Facebook I saw a zillion fake accounts, and that's only those with Burmese names. I have deleted my Facebook account entirely. -- Doubtless, we'll have another news dump on Friday. Stay tuned. kmk 2-22-2018 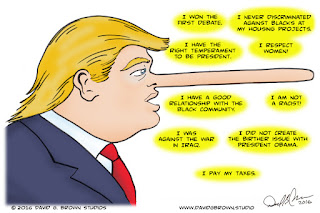 Cartoon from Internet.
Posted by Kyi May at 4:20 AM