A LOT older than Buddhism in Burma, yet we know nothing abt it.

https://www.britannica.com/place/Anuradhapura-Sri-Lanka
https://whc.unesco.org/en/list/200/
It's ironic that present-day generals go/went to Sri Lanka just to study how Tamil genocide was conducted.  i e their criminals in orange robes went.
Only 3 of my 40+ to 100?? extended family members have gone to the Bodhi Tree in Sri Lanka but they are all "Buddhist Saints"  meditating or gossiping all day.
I was looking for origins of name Anawrahta/Anirudhha
so--
there was Anurudha, another cousin of Prince Siddhartha--like Ananda,Yosadhara and Devadatta--(I am just using the international transliterations)
BEFORE that--there was the Hindu god, one of avatars of Vishnu
Anirudha see Dream of Usha and Anirudha.
Now, I don't know which Anirudha/Anurudha the Burmese king Anawrahta was named after--
probably the Hindu one bc he brought the Sacred Tooth from Sri Lanka and before that--he might have been  a worshiper of Vishnu
Shin Arahan was from Thaton on the sea coast.
There is a Nat Hlaung Kyaung  "temple/monastery to cage/imprison nats/spirits" in Bagan wh was built by Anawrahta?
so there certainly were Vishnu-worshipers in Bagan during Anawrahta's lifetime in addition to the dreaded/hated Ayee Gyi--a corrupt sect of Buddhism?
and there must have been a lot of sea-traffic, and trade--
Most Burmese and most Americans too, don't have a distinct timeline in their heads.
One asked me when Alexander the Great lived--when you can just Google it.
The past is very long and the future is infinite.
To think any race/religion fell from the sky is downright stupid and so is it to think you and yr beliefs are the best.
Time shld tell but sometimes it doesn't.
For instance, why would cockroaches/roaches survive?
k
1-9-2023 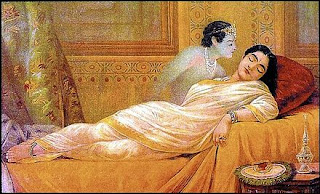