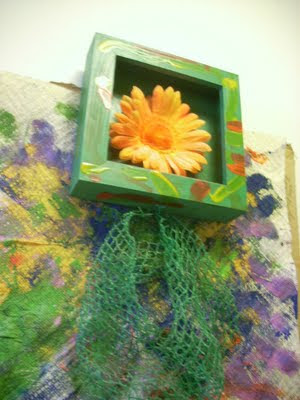 and here is my own Sunflower Sutra (Naykyar Pan Thoke)after Allen Ginsburg.

you give me permission to talk about Buddhism
Tibetan,
spincters, old railroad lines
old lines of old stories
going back to the old country

maybe incest in some families
the promise and the failures of the new
new country, the I country, the You country.

is it a take down, an assassination, an execution
do we do this in America
Michael Moore saying,to CNN, I am glad he's gone
Bin Ladin, but we lost something.

you give me permission to be angry.

Vajrapani, the bodyguard of Buddha
sometimes depicted with blue skin a necklace of skulls
sometimes shown the Gupta period, as a Greek man with curly
hair.

I only saw Ginsburg once at a reading at
the University of Pennsylvania
I got in because the house manager asked me
dead pan - You're downstage guard today, aren't you.

Maybe down stage guard for life regarding Burma.
Must you write in Burmese to be a Burmese poet.

isn't it enough to just be "a poet" of no nationality or all nationalities.

What a sad life Bin Ladin must have lived in Abbottabad
named after a certain British Mr Abbot
as Maymyo in Burma another hill station named after a Colonel May. But now it has a Burmese name. Pyin Oo Lwin.

The family never went out, never called out for pizza
maybe ate goat meat, how many different ways.
The wives never went to shop for their own clothes or their own food, never gossiped in the bazaar, never chose their own eggplant

no flowers in the grey yard, though said to have been a pet rabbit. everything barricaded and the last meal
perhaps would have been either red beets or red tomatoes and hard boiled eggs lying in a concrete sink.

the journalists said he lived in relative comfort but
give me Allen Ginsburg's untidy life and sunflower sutra any day. Ginsburg did not kill anyone.

Never met but once briefly yet went to his funeral
Naropa Institute Boulder Colorado, where
they played a tape of the dead Ginsburg reading his poems
while
a photograph was ceremonially burned and became
right before us, Ashes.

Give me his memorial service any time.

This poem copyright Kyi May Kaung.