Day trip to Virginia Museum of Fine Arts, by Kyi May Kaung

It all went very well, my 3rd trip with The Village.

Our departure was one hour late, as the bus engine lost a belt, and there was no replacement bus, and it took over one hour for the mechanic to get in from Howard County, due to traffic and a fire?  on Bradley Blvd, but once he came, it was fixed in 15 mins.

One of the women from South Asia per her first name, was rather aggressive, but I just said it really looked like there was an engine problem, the engine was mounted at the back of the bus like a VW and I saw the driver looking at it when I walked up.

The woman kept saying, "But how did he get here?"

I did not get involved in all that.  I just said, "I know nothing of engines," and it is true.

I used the waiting time constructively to chat with some of the other women, and the sculptor who made the fat nude I admired early.  She came with a roll on luggage piece, and she said she could not walk 1 1/2 block to get a taxi.  I would have chatted with her more, but her taxi came.

What I am beginning to learn in talking to visual artists and writers is they don't do all this fucking work because they are stinking rich and have more than enough time to scratch their arse.  (This includes me)--they do it through sacrifice and a lot of struggle at a low income level.

*
We made up for lost time by not having a rest stop, and got there in time for lunch, only 15 mins. late.  I really like the ever smiling, and it's not a put on smile either, of the young lady in charge.

We are very fortunate to live in such a nice Village.
*
We had lunch in the Marble Hall inside the Museum.
A nice sit-down lunch with iced tea or hot tea, for me chicken and a cream cheese dessert but quite light.

Because  I did not wish to disconcert or annoy my companions, I told them why I was taking pictures--"I have a blog and it is mostly artists and writers inside Burma and they love to see the travel pics.  But I won't take pictures of people, just of the food."
We introduced each other and the really funny woman whose husband is in a wheel chair said, "I know Kyi already."
I don't know how.

She kept saying how special this trip was for them, as "A few months ago he could not get up, he was lying in bed."

Now he looks fine, and smiled at all his wife's funny remarks.  She seemed on a par with Kay Kendal, the beautiful clown who was Rex Harrison's wife.  I really liked them.

I could not take any pictures of the art work itself, but did take some of the transparent elevator and the lovely garden.

There were many works I recognized as I walked in, such as Jasper Johns and Rauschenberg, but after the flowers and looking so carefully, I was conked out and needed a cappucino.

Same lovely lady saw me sitting alone and said, "What are you doing, Kyi?  Come on over."
So I scooted over and we laughed some more.

I wish I had waited when we got back to say good bye to them properly, but I was rather weary.

On the way out, the woman in seat next to mine told me about 2 Jewish concentration camp survivors, brothers now 91 and 92, who don't talk "because he felt he did not do enough to save the father (in the camp)"

I can't write that story, it is written already, but I can imagine what happened.

I did ascertain that it did not result in a legal case, but only the 2 brothers not talking.

This lady seemed more interested in crossword puzzles and Sudoku, and on the drive back she just worked on the puzzles she brought along, and I looked out of the window at all the green trees flashing by. 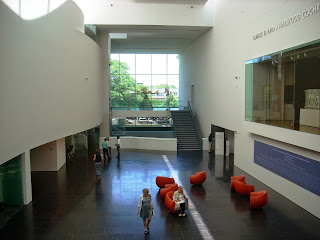 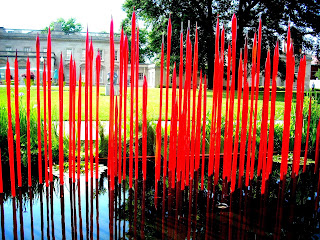 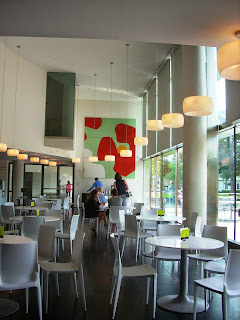 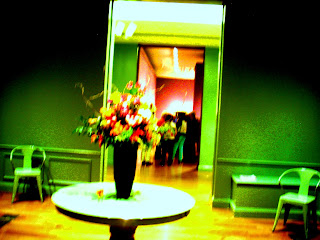 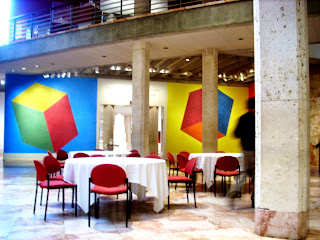