Review by Kyi May Kaung of Bertil Lintner's Outrage-- 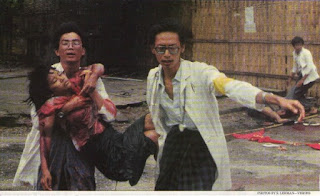 A classic now, and the only comprehensive and insightful account of the earth-shaking events of Burma March 1988--to 1990 just before the elections.

This book has been on my to-read list for a very long time, but until now, was not easy to obtain.
In about 1991, I saw an edition published in Thailand, at the home of my Karen friend in Princeton, but it was a poor physical production, done on rather cheap paper.

Also, I could only glance at it, as all my friend's many friends were lined up to read it too, and it was starting to fall apart at the spine.

I am so glad I could get the new revised edition now.

It goes blow by blow from the historic brawl in a Rangoon Institute of Technology tea shop to the events of 1988, 89 and up to 1990.

Not only is the detail and the writing good and clear, it also does not forget the wood for the trees.  Lintner never pulls any punches and always lays it out as it is or was.

It puts everything in perspective.

The regime's alternate bungling and brutality, its time honored fall back on the only thing it understands, state sponsored violence.

Its disrespect and underestimation of the Burmese people, its trotting out of one front man puppet after another.

I was not in Burma during this period, and writing my dissertation at the Univ. of Pennsylvania, Bertil Lintner's reports in the Far Eastern Economic Review, Seth Mydans in the New York Times and the BBC broadcasts through NPR, were all I had.

My dissertation was on why totalitarian systems like Burma, China and the USSR/Russia make such an infernal mess.

Reading Outrage recalls many of the events, such as Dr. Maung Maung, ridiculed as "Hpaung gar sar Maung Maung," a king who ruled only one week.

In time I met Bertil Linter as well as Mrs. Lintner (Hseng Noung), and others mentioned in the narrative, such as Htun Aung Gyaw and Moethee Zun.

I believe everything Lintner writes, because it all logically hangs together, and it coincides with everything I heard in those embroiled years and later.

This is truly Bertil Lintner's magnum opus, and I am happy there is at last a Burmese translation.

Lintner's work shows the power and the lasting value of the written word.

Incidentally, that it this book is still in demand and is becoming a classic is shown by the market price of the books.

One volume of Lintner is worth more than 100s of copies of sycophantic writers like Dr. Maung Maung, Htin Aung (he allegedly wrote his history to curry favor with Ne Win so he could return home in his old age) and Thant Myint-U.

--Kudos--I hope you will write of after 1990 including up to now and the facade democracy.